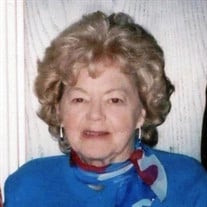 A family graveside service for Delora Bixler will be 2:00 p.m. Saturday, November 7, 2020, at the Memorial Hill Cemetery north of Waynoka, with Pastor Leon Veazy officiating. Interment is under the direction of Marshall Funeral Home of Waynoka, LLC. Delora Maxine (Frieden) Bixler, daughter of the late Eli and Ollie Frieden, was born on April 6, 1921, at Burlington, Oklahoma. She passed away on October 30, 2020, at Share Convalescent Home, Alva, Oklahoma, at the age of 99 years, 6 months, and 24 days. Delora graduated from Burlington High School in 1939 and attended Northwestern State College where she obtained an Associate Degree. She was a Member of the Alpha Sigma sorority at Northwestern. She worked as an accountant at the Prisoner of War Camp in Alva for two years. Then she worked for Beechcraft Corporation in Wichita, Kansas, for a period of time. On January 3, 1946, she was united in marriage to Ray Bixler at her parents’ home in Burlington, Oklahoma. Delora and Ray started their married life on a farm six miles north of Waynoka. She was a talented homemaker and seamstress. Delora loved to decorate for the holidays and made each one special. She took pride in keeping an immaculate home and preparing meals for her family. She was an excellent cook especially known for her desserts and her roast beef made in the “famous” pot. She was actively involved supporting her two sons with their 4-H and FFA projects. She enjoyed watching livestock shows and always tried to respect the judges’ decisions. In her later years, she thoroughly enjoyed watching her three grandsons play basketball and baseball. Delora was a good listener and offered sound advice, wisdom and encouragement. Delora was an avid reader and competitive bridge player. She was a member of the First United Methodist Church of Waynoka where she served as Communion Steward for many years, taught Sunday School and helped coordinate funeral dinners. Besides her parents, Delora was preceded in death by her husband Ray; two brothers, Robert Frieden and wife, Patricia Frieden, Dale Frieden and wife, Electa Frieden; a sister, Lorine Frieden; and nephew, Blayne Frieden. Delora is survived by two sons: Stan and his wife, Rodeana, of Waynoka, and Scott and his wife, Lynn, of Enid; grandsons: Blake and his wife, Chelsea, of Edmond, Clark and his wife, Bethany, of Waynoka, and Brandon of Oklahoma City; and two great grandchildren: Braden and Lexi; many nieces and nephews, other relatives and friends. In lieu of flowers, memorial contributions may be made through the funeral home to the First United Methodist Church, the Waynoka Food Pantry, or Share Medical Center Foundation.

A family graveside service for Delora Bixler will be 2:00 p.m. Saturday, November 7, 2020, at the Memorial Hill Cemetery north of Waynoka, with Pastor Leon Veazy officiating. Interment is under the direction of Marshall Funeral Home of Waynoka,... View Obituary & Service Information

The family of Delora Maxine Bixler created this Life Tributes page to make it easy to share your memories.

A family graveside service for Delora Bixler will be 2:00 p.m....

Send flowers to the Bixler family.