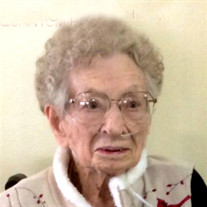 Graveside services for Delza Rodgers will be 1:00 p.m. Tuesday, March 21, 2017, at the Alva Municipal Cemetery Pavilion with Ron Pingelton officiating. Interment is under the direction of Marshall Funeral Home of Alva. Delza Grace Rodgers, the oldest child of the late Emsley Curtis and Julia Alice (Wright) Parsons, was born November 9, 1921, and passed away March 15, 2017, at Lawton at the age of 95 years, 4 months, and 6 days. Delza attended Farry and Greenleaf schools and later graduated from Horace Mann High School. On September 19, 1942, she was united in marriage to Fletcher Rodgers of Wichita, Kansas. He passed away on October 5, 1975. She worked numerous places but was mainly a housewife and mother. She loved quilting, mowing, fishing, and caring for anyone who needed it. Besides her parents and her husband, Delza was preceded in death by four brothers, Neal, Henry, Dale, and Gail; one sister in law; two nieces; two nephews; and two grandsons. Delza is survived by three children, Harold Rodgers and his wife, Sonja, of Moore, Lowell Rodgers and his wife, Beverly, of Blackwell, and Pat Canaday and husband, Lee, of Cache; grandchildren, great grandchildren, and great great grandchildren, all of whom she loved very much. Memorial contributions may be made through the funeral home to the charity of your choice.

The family of Delza Rodgers created this Life Tributes page to make it easy to share your memories.

Graveside services for Delza Rodgers will be 1:00 p.m. Tuesday,...

Send flowers to the Rodgers family.