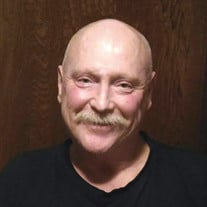 Funeral services for Dennis Lyons will be 2:00 p.m., Thursday, March 22, 2018, at the Bible Baptist Church in Alva with Pastor John Clapp officiating. Arrangements are under the direction of Marshall Funeral Home of Alva. Dennis Gene Lyons, son of the late Daniel Walter and Mary Francis (Busbee) Lyons, was born February 14, 1958, at Tampa, Florida, and passed away March 20, 2018, at his home in Waynoka at the age of 60 years, 1 month, and 6 days. Dennis graduated from high school in Modesto, California. He was an over the road truck driver and later trained truck drivers. He was a talented cabinet maker and enjoyed woodworking. On January 31, 2007, he was united in marriage to Kathy Ann Burton at Lawton, Oklahoma. They traveled with their jobs and lived in Raton, New Mexico, Lawton, and Alva before settling in Waynoka in 2013. Besides his parents, Dennis was preceded in death by a brother, Donald Lyons. He is survived by his wife, Kathy, of Waynoka; three children, Michelle Peeples and husband, Harold, Matthew Lyons, and Michael Lyons, all of Turlock, California; three stepchildren, Mariah Hoover and husband, Michael, Kasey Burton, and Johnny Burton, all of Alva; five grandchildren, Taylor and Katelyn Peeples, and Grayson, Lincoln, and Oliver Lyons; three step-grandchildren, Christian Burton, Gabriel Hoover, and Patience Ramos; three brothers, David Lyons of Sutherland, Texas, Daniel Lyons of Houston, Texas, and Darryl Lyons and wife, Robin, of San Antonio, Texas; other relatives and friends. Memorial contributions may be made through the funeral home to the Bible Baptist Church.

Funeral services for Dennis Lyons will be 2:00 p.m., Thursday, March 22, 2018, at the Bible Baptist Church in Alva with Pastor John Clapp officiating. Arrangements are under the direction of Marshall Funeral Home of Alva. Dennis Gene Lyons,... View Obituary & Service Information

The family of Dennis Gene Lyons created this Life Tributes page to make it easy to share your memories.

Send flowers to the Lyons family.