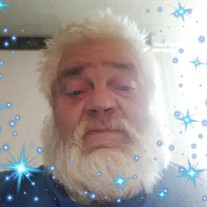 Graveside services for Dennis James “Gus” Walker will be 2:00 p.m. Wednesday, February 16, 2022, at the Waynoka Municipal Cemetery with Pastor Waylan L. Upchego officiating. Interment is under the direction of Marshall Funeral Home of Alva. Dennis James “Gus” Walker, son of the late Jackie Duane and Patricia Ann (Frye) Walker was born March 18, 1959, in Waynoka, Oklahoma, and passed away February 11, 2022, in Enid, Oklahoma, at the age of 62 years, 10 months, and 23 days. Gus grew up in the Waynoka area and graduated from Waynoka High School. On April 25, 1987, he was united in marriage to Julie Mae Estep in Waynoka. They made their home in Waynoka where he recycled metal. He was a member of the Church of Jesus Christ of Latter Day Saints. He loved watching football, especially the Oklahoma Sooners, the Dallas Cowboys, and the Kansas City Chiefs. He enjoyed art and like to paint and whittle. Besides his parents, he was preceded in death by one brother, Jake Walker. Gus is survived by one son, William Walker and wife, Kelsey Broyles, of Sapulpa; one daughter, Lacy Walker and husband, Eric Delgado, of Tulsa; three brothers, Bill Walker and wife, Karen, of Woodward, Dan Walker and wife, Lyndee, of Fort Worth, Texas, and Mick Walker of Quinlan; one grandchild, Jessie, and Jonas is on the way. Memorial contribution may be made in his memory to Marshall Funeral Home.

Graveside services for Dennis James “Gus” Walker will be 2:00...

Send flowers to the Walker family.