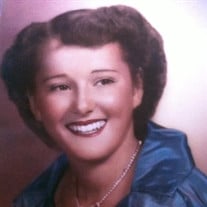 Graveside services for Dixie Dollie Clemence will be 10:30 a.m. Tuesday, July 24, 2018, at the Waynoka Municipal Cemetery with Tom Ward officiating. Interment is under the direction of Marshall Funeral Home of Waynoka. The casket will remain closed. Dixie Dollie Clemence, daughter of the late Jerry Edward and Grace Lillian (Davidson) Beagley, was born September 27, 1934, in Woods County, Oklahoma, and passed away July 20, 2018, in Oklahoma City, Oklahoma, at the age of 83 years, 9 months, and 23 days. Dixie attended Freedom School and graduated with the Class of 1952. On June 7, 1952, she was united in marriage to Merle Dean Clemence at Waynoka. They lived in Waynoka until they moved to their home east of town a few years ago. Dixie was given the gift of hospitality, always welcoming people into her home and making sure they were not hungry. As a talented seamstress, she sewed many things for her family, including the wedding dresses for her daughter, Merla, and her nieces, Kama and Schreé. She loved living in the country where she was able to watch the wildlife. Besides her parents, she was preceded in death by four brothers, Carl, Lloyd, Alfred, and Jim Beagley, and three sisters, Vera Schultz, Nola Storer, and Laura Bliss. Dixie is survived by her husband, Merle, of Waynoka; one son, Mark Clemence and wife, Debbie, of Woodward; one daughter, Merla Sims of Waynoka; one brother, Bill Beagley of Springfield, Missouri; six grandchildren, along with two others they helped raise and considered to be grandchildren; 11 great-grandchildren; other relatives and friends. Memorial contributions may be made through the funeral home to the Waynoka EMTs.

Graveside services for Dixie Dollie Clemence will be 10:30 a.m. Tuesday, July 24, 2018, at the Waynoka Municipal Cemetery with Tom Ward officiating. Interment is under the direction of Marshall Funeral Home of Waynoka. The casket will remain... View Obituary & Service Information

The family of Dixie Dollie Clemence created this Life Tributes page to make it easy to share your memories.

Graveside services for Dixie Dollie Clemence will be 10:30 a.m....

Send flowers to the Clemence family.