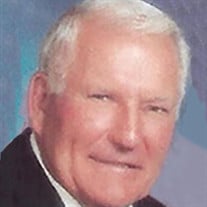 It is with heavy hearts that we announce the passing of Don Wesley Green, a beloved husband, father, grandpa and brother. Don was 88 years old. He returned to his Heavenly Father on Thursday, December 3, 2020. He passed away, with the love of his life by his side, at his home in Alva, Oklahoma. He was surrounded by the caring thoughts and prayers of those that knew and loved him. He was born March 19, 1932, in American Fork , Utah, to Phillip Welsey and Leah Bush Green. He married his high school sweetheart, LuAnn Brown, on January 7, 1952, in the Salt Lake Temple. He attended school in American Fork. Don was an outstanding athlete. He played football and basketball at American Fork High School. The year he graduated, in 1950, his basketball team won the Utah State Class B basketball championship. He attended the Branch Agricultural College in Cedar City, Utah, for one year on a football scholarship, majoring in agriculture and a minor in geology. He was then drafted into the Army in 1952 during the Korean War and served as a military policeman at the Presidio of San Francisco. He then worked for U.S. Steel in Orem, Utah, until 1962 when he transferred to the Atlantic City Iron Ore Mine in Lander, Wyoming. He was the chief supervisor of maintenance until he retired in 1984 when the mine closed. He then worked various construction jobs that included working on the Jackson Lake Dam and other projects. He served as a scoutmaster in American Fork and Lander. He was active in the Church of Jesus Christ of Latter Day Saints and was a home teacher for most of his adult life. Don performed numerous acts of service for others in need, many of which went unnoticed. He served two church service missions with his wife. They served their first service mission at Martin’s Cove: Mormon Trail Site in Wyoming. He helped build the visitor’s center, trails, and other buildings. Their second mission was for Deseret Land and Livestock at Woodruff and Promontory Point, Utah. He loved the outdoors. Some of his fondest memories are taking his six kids hunting, fishing, camping and packing in the Wind River Mountains of Wyoming. He loved watching his boys wrestle and play football. He always encouraged his children, telling them they could do anything they put their minds to. He taught them the importance and value of hard work. He spent his childhood working on his father’s ranch raising cattle and hay. He later shared his love for cattle and horses with his children on their home place in Wyoming. He and his wife moved to Alva, Oklahoma in 2007. He was preceded in death by his parents, three brothers, two sisters and one son, Michael. He is survived by his wife, LuAnn Green of Alva; three sons and two daughters: Sandra Sanduk of Salt Lake City, Utah; Steven Emery Green of Soda Springs, Idaho; Scott Welsey Green of Elko, Nevada; Bryan Don Green, and his wife Lori, of Big Piney, Wyoming; and Michele Dawn Mackey of Alva, Oklahoma. He has 19 grandchildren and 23 great-grandchildren. The service will be live streamed through Wing Mortuary’s website. https://www.wingmortuary.com/

It is with heavy hearts that we announce the passing of Don Wesley Green, a beloved husband, father, grandpa and brother. Don was 88 years old. He returned to his Heavenly Father on Thursday, December 3, 2020. He passed away, with the love... View Obituary & Service Information

The family of Don Wesley Green created this Life Tributes page to make it easy to share your memories.

It is with heavy hearts that we announce the passing of Don Wesley...

Send flowers to the Green family.