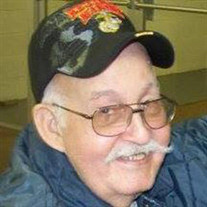 Funeral services for Donald David Canaan will be 2:00 p.m. Wednesday, February 1, 2017, at the Bible Baptist Church with Pastor John Clapp officiating. Interment will be in the Alva Municipal Cemetery under the direction of Marshall Funeral Home of Alva. Donald David Canaan, son of the late William Elmor and Pearl Mae (Sallee) Canaan, was born November 14, 1934, at Alva, Oklahoma, and passed away January 25, 2017, at Alva, Oklahoma, at the age of 82 years, 2 months, and 11 days. Don attended Alva High School before joining the United States Marine Corps where he later completed his high school education. On March 2, 1958, he was united in marriage to Lorna Violet “Susie” Combs at the Methodist Parsonage in Alva. He retired from the United States Marine Corps after 20 years of service, including two tours of Vietnam. After retiring from the United States Marine Corp, he resided in the Alva/Helena area where he worked as a Deputy for the Woods County Sheriff, then taking a job at the Helena State School for Boys as a juvenile officer, transporting juveniles. Upon the closure of the state school, he transferred to the Department of Corrections as a Sargent until his retirement in January, 1995. He was a member of the Bible Baptist Church. His family was very important to him and he greatly enjoyed his grandchildren and great grandchildren. Besides his parents, he was preceded in death by two brothers, Orville Canaan and Billy Joe Canaan; and one sister, Ethel Rose. Don is survived by his wife, Lorna, of Alva; two sons, William Canaan and wife, Casey, of Alva, and David Canaan and wife, Cindy Jo, of Carmen; two daughters, Cindy Wright and husband, Joe, of Hunter, and Mary Perrin and husband, Ray, of Alva; one brother, Melvin Canaan of Blackwell; two sisters, Dorothy Aker of Los Ranchos, New Mexico, and Beverly Cushman of Enid; 13 grandchildren; 17 great grandchildren; other relatives and friends. Memorial contributions may be made through the funeral home to the Wounded Warrior Project.

Funeral services for Donald David Canaan will be 2:00 p.m. Wednesday, February 1, 2017, at the Bible Baptist Church with Pastor John Clapp officiating. Interment will be in the Alva Municipal Cemetery under the direction of Marshall Funeral... View Obituary & Service Information

The family of Donald David Canaan created this Life Tributes page to make it easy to share your memories.

Funeral services for Donald David Canaan will be 2:00 p.m. Wednesday,...

Send flowers to the Canaan family.