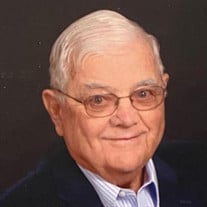 Born May 1, 1938 in Aline to Orval and Mildred Hughes. Don grew up in Aline, Oklahoma and in the Aline Methodist Church. He graduated from Aline Public Schools in 1957. He attended Northwestern Oklahoma State University for two years before attending Oklahoma State University where he graduated in 1960 with a degree in Animal Husbandry. While attending Oklahoma State University, Don was a member of the FarmHouse fraternity and Livestock Judging Team. When Don was not at school, he lived and worked on the family farm west of Aline. On April 17, 1960, he was united in marriage to Ruby Schuessler of Alva whom he met on a blind date. Don and Ruby began farming immediately. From their union came two daughters, ReJeana Marie and Jeanette Renea who were both raised to love the farm. Don was a good teacher. He gave many young men jobs on the farm, several of whom return every summer to continue helping. Through the years, Don rarely missed a musical event his daughters or granddaughters participated in. On April 17th of 2020, Don and Ruby celebrated 60 years of marriage. During these 60 years Don served on the Aline School Board, the Production Credit Board, and the Farm Credit Boards. In 1999, Don received a Conservation Award from Alfalfa County. Don is survived by his wife, Ruby; their daughters ReJeana Wiebener and husband Rick of Alva, Jeanette Kremeier and husband Paul of Alva; his brother, Dale R. Hughes and wife Donna of Norman: grandchildren Ryan Wiebener of Enid, Raeden Wiebener of Alva, and Riley Faulkner and her husband Joshua of Newkirk and their children Lennox and Leighton; his brother-in-law Harvey Schuessler and his wife Shirley of Alva; his nephews Dean Hughes and wife Christa of Carmen, Doug Hughes of Carmen, Dow Hughes and wife Deanne of Tulsa, Dave Hughes and his wife Michelle of Tulsa, Steve Griffin and wife Lela of Des Moines, Iowa, and Stan Griffin and his wife Candy of Fairfax; nieces, Cindy Eimen and her husband David of Tulsa, and Jana Ree of Broken Arrow. Don is preceded in death by his father Orval Hughes and mother Mildred Hughes: brother Ben Hughes and wife Jean, and sister Bettie Jean Hughes. Don will lie in state at Marshall Funeral Home in Alva, until 12:30 on Thursday, January 14th, when he can be viewed at the Zion Lutheran Church at 218 Maple Street in Alva. A service at the Lutheran Cemetery located 2 miles South of Alva on Harmon Road, will follow at 2:00 that afternoon. The graveside will be live streamed on the Marshall Funeral Home Facebook page and transmitted over FM radio so people can safely attend the service without having to exit their vehicle. In lieu of flowers, memorial donations may be made to Zion Lutheran Church in Alva, the Aline Fire Department, the Freedom Fire Department, or Northwestern Oklahoma State University Foundation, Music Department.

Born May 1, 1938 in Aline to Orval and Mildred Hughes. Don grew up in Aline, Oklahoma and in the Aline Methodist Church. He graduated from Aline Public Schools in 1957. He attended Northwestern Oklahoma State University for two years before... View Obituary & Service Information

The family of Donald Clayton Hughes created this Life Tributes page to make it easy to share your memories.

Send flowers to the Hughes family.