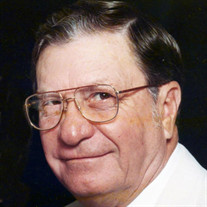 Memorial services for Donald Lee Maxwell will be 1:00 p.m. Saturday, July 24, 2021, at the Marshall Funeral Home Chapel with Rev. Katie Hill officiating. Private family services will be held at a later date. He was cremated at his request under the direction of Marshall Funeral Home of Alva. Donald Lee Maxwell, son of the late Herbert and Mary (Beck) Maxwell, was born March 23, 1929, in Alva, Oklahoma, and passed away July 4, 2021, in Alva, Oklahoma, at the age of 92 years, 3 months, and 23 days. He was a graduate of Selmon High School in 1947. Donald joined the U.S. Air Force in 1948 and trained as an aircraft mechanic on B-29s. Donald married Betty Jo Chase in 1950. Donald and Betty had three sons, Stephen, Scott and Jeffrey. Donald was trained at the Spartan School of Aeronautics as a pilot/engineer and worked for TWA Airlines and Flying Tiger Airlines and flew all over the world for 32 years with over 26,000 flight hours until retiring in 1989. Donald was an aircraft enthusiast and prodigious golfer. Donald retired in 1989 and married Glenda Venosdel. Donald and Glenda lived in various places around the country in their retirement years but settled in Alva. Glenda passed away in 2016. Besides his parents, he was preceded in death by his wife, Glenda; one brother, Cleo Maxwell; and two sisters, Lois Carlson and Zola Pantry. Donald is survived by three sons, Stephen Maxwell and wife, Sarah, of Overland Park, Kansas, Scott Maxwell and wife, Leslie, of Edmond, Oklahoma, and Jeffrey Maxwell and wife, Kristi, of Edmond, Oklahoma; stepdaughter, Angela Nelson, and husband, Timothy, of Alva; one nephew, Denis Carlson and his wife, Sara, of Freedom; ten grandchildren, Kayli Maxwell of Edmond, Myka Naylor and husband, Ryan, of Oklahoma City, Baylor Maxwell and wife, Ariel, of Galveston, Texas, Truitt Maxwell of Houston, Texas, Codi and Casey Maxwell, both of Oklahoma City, Kristin Gayden of Longmont, Colorado, and Wade Maxwell of Augusta, Kansas, Vannessa Scoggins of Alva, and Caitlyn Blankenship and husband, Chris, of Cherokee, Iowa; seven great grandchildren; numerous nephews, nieces, cousins and friends. In lieu of flowers, the family requests memorial contributions to be made through the funeral home to a trust set up for the children of Lonnie Bolar.

Memorial services for Donald Lee Maxwell will be 1:00 p.m. Saturday, July 24, 2021, at the Marshall Funeral Home Chapel with Rev. Katie Hill officiating. Private family services will be held at a later date. He was cremated at his request... View Obituary & Service Information

The family of Donald Lee Maxwell created this Life Tributes page to make it easy to share your memories.

Memorial services for Donald Lee Maxwell will be 1:00 p.m. Saturday,...

Send flowers to the Maxwell family.