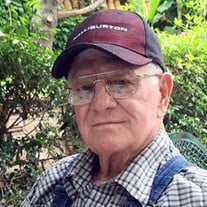 Funeral services for Donald Ray Noblitt will be 11:00 a.m. Saturday, February 16, 2019, at the Marshall Funeral Home Chapel with Rev. John Clapp officiating. Interment will be in the Freedom Cemetery under the direction of Marshall Funeral Home of Alva. Donald Ray Noblitt, son of the late Oscar Lee and Purney (Roach) Noblitt, was born March 5, 1930, in Alamogordo, New Mexico, and passed away February 11, 2019, at Ardmore, Oklahoma, at the age of 88 years, 11 months, and 6 days. Don graduated high school in Freedom. He entered the United States Army and served a tour in Korea during the Conflict. On April 18, 1953, he was united in marriage to Naomi Faye Conn in Freedom, Oklahoma. In 1956, he started work for Halliburton, where he worked until his retirement in 1984. He enjoyed fishing and elk hunting. Besides his parents, he was preceded in death by his wife, Naomi; and five siblings, Georgie May, Orletta, Oscar, Elzie, and Twila. Don is survived by four sons, Garold Noblitt and wife, Joan, of Casper, Wyoming, Stan Noblitt and wife, Vanya, of Corinth, Texas, Mike Noblitt and wife, Karen, of Chandler, Arizona, and Dirk Noblitt and wife, Debbie, of Modesto, California; and one sibling, Elsie Williams and husband, Bob, of Ponca City. Also surviving are eight grandchildren, Nick Noblitt and wife, Sherina, of Casper, Wyoming, Dustin Noblitt of Ft. Collins, Colorado, Jessica Noblitt of Boise, Idaho, Natasha Noblitt and husband, Matthew Griffiths, of Corinth, Texas, Heather Noblitt of Chandler, Arizona, Michelle Noblitt of Chandler, Arizona, Chase Noblitt and wife, Vanessa, of Bend, Oregon, and Megan Noblitt of Redmond, Oregon; six great grandchildren; other relatives and friends. Memorial contributions may be made through the funeral home to the Oklahoma Medical Research Foundation for Alzheimer’s Research.

Funeral services for Donald Ray Noblitt will be 11:00 a.m. Saturday, February 16, 2019, at the Marshall Funeral Home Chapel with Rev. John Clapp officiating. Interment will be in the Freedom Cemetery under the direction of Marshall Funeral... View Obituary & Service Information

The family of Donald Ray Noblitt created this Life Tributes page to make it easy to share your memories.

Funeral services for Donald Ray Noblitt will be 11:00 a.m. Saturday,...

Send flowers to the Noblitt family.