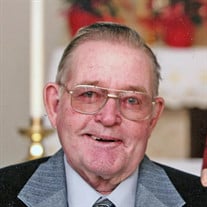 Memorial services for Donald Smith will be 10 a.m. Saturday, August 17, 2019, at the First Presbyterian Church in Alva. Cremation arrangements are under the direction of Marshall Funeral Home. Donald Parker Smith, son of the late Ralph P. and Mabel (Parker) Smith, was born in the Northeast corner of Woods County, on August 19, 1933 and he passed away in Woodward, Oklahoma on August 5, 2019, at the age of 85 years, 11 months and 17 days. Don grew up on the farm West of Alva and was the youngest of four boys (Harley, Delbert, Robert). Don’s education started at Mulberry Center and ended with graduating from Farry School with the class of 1951. Don enjoyed playing baseball, hunting, golfing and working cattle. Don worked the farm with his father, and in 1956 he was called to service in the army, working for the 495th M.I.S.B.T. at Fort Bliss, Texas. On September 5, 1959, Don was united in marriage to Jane Kathryn Barham, making their home in Alva. To this union two daughters were born: Kathryn and Kelly. Don did some work for his In-Laws at the Colony Furniture Store and helped with custom harvesting. In 1967, he went to work for Cities Service Gas in Alva, and he retired from Williams Gas in 1992. After retiring, Don continued with his farming and ranching and enjoyed going to the coffee shop. In February 2019, after suffering some health issues, Don moved to Providence Place, an assisted living center in Woodward, OK, where he resided until his death. Don was preceded in death by his wife, parents, three brothers, and three nephews. Don is survived by his two daughters: Kathryn McGuire and husband, Pat, of Woodward, and Kelly Benson and husband, Bennie, of Alva; three grandchildren: Keri Pannell and husband, Billy, of Alva, Ericka Beaty and husband, Kris, of Woodward, and Ryan McGuire of Austin, TX; five great-grandchildren, Jordyn, Matthew and Rowen Pannell, and Lakin and Kaitlyn Beaty; nephews, Craig and Kyle Smith; and niece Cheryl Franzese. Don said for the rest of his story…...go to the coffee shop. In lieu of flowers, Don requested that memorial contributions be made through the funeral home to the Wounded Warriors Project.

Memorial services for Donald Smith will be 10 a.m. Saturday, August 17, 2019, at the First Presbyterian Church in Alva. Cremation arrangements are under the direction of Marshall Funeral Home. Donald Parker Smith, son of the late Ralph P.... View Obituary & Service Information

The family of Donald Parker Smith created this Life Tributes page to make it easy to share your memories.

Memorial services for Donald Smith will be 10 a.m. Saturday,...