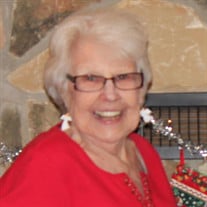 Donna Mae Landreth, daughter of the late Ray and Mary (Nelson) Burns, was born on March 21, 1930, in Alva, Oklahoma, and passed away on December 24, 2020, in Alva, Oklahoma at the age of 90 with her three children by her side. She attended school in Dacoma until her graduation from high school. She then attended Northwestern State College and graduated with degrees in business and education. It was during her time at NSC that she met the love of her life, Jeff Landreth. They were married on July 20, 1952, and moved to Attica, Kansas, where they both taught classes and Jeff began his coaching career. After several years in the education field, they moved back to Alva and started a farming and ranching operation which they continued until Jeff’s death in 2007. They had been married 55 years at the time of his passing. Prior to residing in Beadles Nursing Home, Donna was a member of the Alva First Baptist Church where she served in many capacities. She was active in Delta Zeta sorority, served on committees of the Northwest Family Services and had a giving spirit and kind-hearted manner in all that she did. She also enjoyed reading, sewing, crafting, activities with her family and watching her kids and grandkids play sports. Donna is remembered by her sister, Toni Geis, of Vacaville, California, two sons, David and his wife Janet, of Houston, Texas, and Kevin of Ponca City, Oklahoma; one daughter, Kayla Haskins and her husband Max and their children, Adrianne, Allie and Aidan, all of Burleson, Texas, and many other relatives and friends. Her sister, Mary Lee, preceded her in death. Memorial contributions may be made through the funeral home to Alva First Baptist Church or Northwest Family Services. In light of the current situation and out of concern for everyone’s health and safety, only a private graveside service will be held at this time. We hope to hold a public memorial service at a later date when it is considered safe to do so. Marshall Funeral Home of Alva has been entrusted with the arrangements. The graveside service will be livestreamed on the Marshall Funeral Home page on Facebook.

Donna Mae Landreth, daughter of the late Ray and Mary (Nelson) Burns, was born on March 21, 1930, in Alva, Oklahoma, and passed away on December 24, 2020, in Alva, Oklahoma at the age of 90 with her three children by her side. She attended... View Obituary & Service Information

The family of Donna Mae Landreth created this Life Tributes page to make it easy to share your memories.

Send flowers to the Landreth family.