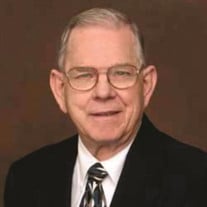 Graveside Services for Donovan Leroy Reichenberger will be 2:00 p.m. Thursday, December 17, 2020, with Father Bala Sagili Jesudas officiating. Interment will be in the Sacred Heart Cemetery under the direction of Marshall Funeral Home of Alva. Donovan Leroy Reichenberger was born on August 5, 1927, to Joseph A. and Cecilia (Thimmesch) Reichenberger in Mt. Hope, Kan., and passed to his eternal life on December 14, 2020. Graveside services will be held on Thursday, December 17, at 2:00 p.m. at the Sacred Heart Cemetery, Alva, Okla., with Father Bala Sagila Jesudas officiating. A celebration of Donovan’s life will be held later in 2021. As a child with five siblings, Donovan moved to Sharon, Kan., where he graduated from high school. Beginning in 1945, Donovan served in the U.S. Navy for 18 years with assignments in the Atlantic and Pacific Fleets. He served during World War II and the Korean War. During this time, he married the love of his life, Dorothy Teutschmann, on June 6, 1958. Following his naval service, they moved to Alva, Okla. Donovan took only two-and-a-half years of study at Northwestern State College and graduated in 1965 with a Bachelor of Arts degree in Social Science. He then earned a Master’s degree from Wichita State University in 1967. Donovan joined Northwestern State College’s History Department in 1967. He completed additional graduate studies at the University of Kansas and the University of Oklahoma. Donovan retired from Northwestern Oklahoma State University in December 1992 after 25 years of service. In the 47 years of their marriage, Donovan and Dorothy were passionate patrons of the arts. They were dedicated in their attendance at Northwestern’s concerts and theatre productions. After Dorothy’s passing in 2005, Donovan established a memorial scholarship in his wife’s name to support students in the university’s Vocal Department. Donovan’s dedication to the music and theatre programs has grown with four endowed scholarships and six endowed Chairs, all established to provide numerous students with a quality fine arts education. Donovan also endowed a history scholarship. Donovan’s heart for service went beyond the classroom. He served on the Share Medical Center Board and the Cherokee Strip Museum Board. He also served on Alva’s Centennial Planning Committee. Donovan was a faithful member of the Sacred Heart Catholic Church in Alva. Donovan served as a Northwestern Foundation & Alumni Association trustee since 1993. He retired in 2013, becoming Trustee Emeritus at that time. Donovan continued to enjoy the talents of the Northwestern vocal and theatre students until his health declined in the last few years. Students were fond of him and they showed their affection by planning and delivering special performances for him in his home. The Donovan Reichenberger Fundraising Award was established in 2010 to honor Donovan’s example of generosity and fundraising service. The award recognizes the private fundraising efforts of Northwestern’s faculty and staff. Donovan was preceded in death by his wife, Dorothy; his parents; his sister Lonetta Carlile; and his brothers Cletus Reichenberger and Dr. Jerome Reichenberger. He leaves to mourn his passing his sisters, Oringa McGuire, Alva and Rosemary Soptic, Kansas City, Kansas; other relatives; and countless friends, alumni and grateful students. In lieu of flowers, memorials can be made to the Northwestern Foundation & Alumni Association, 709 Oklahoma Blvd., Alva, Okla., 73717. Arrangements by Marshall Funeral Home.

Graveside Services for Donovan Leroy Reichenberger will be 2:00 p.m. Thursday, December 17, 2020, with Father Bala Sagili Jesudas officiating. Interment will be in the Sacred Heart Cemetery under the direction of Marshall Funeral Home of Alva. Donovan... View Obituary & Service Information

The family of Donovan Leroy Reichenberger created this Life Tributes page to make it easy to share your memories.

Graveside Services for Donovan Leroy Reichenberger will be 2:00...

Send flowers to the Reichenberger family.