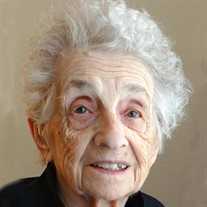 Graveside services for Dorothy Higham will be 1:30 p.m. Wednesday, August 19, 2020, at Leavenworth National Cemetery at Leavenworth, Kansas. Interment is under the direction of Marshall Funeral Home of Alva. Dorothy Regina Higham, daughter of the late George and Henrietta (Geyer) Werb, was born November 12, 1918, at McKeesport, Pennsylvania, and passed away peacefully on August 13, 2020, at Alva, Oklahoma, at the age of 101 years, 9 months, and one day. Dorothy graduated from McKeesport High School in 1937 with perfect attendance. On June 2, 1945, she was united in marriage to Francis J. Higham at McKeesport, Pennsylvania. She was a member of the Catholic Church and was a homemaker. She moved to Alva from Overland Park, Kansas, in 2014 and prior to that lived in Dayton , Ohio. Besides her parents, she was preceded in death by her husband, Francis; her daughter, Patricia Sumner; and her sister, Mercedes Sowko. She is survived by her daughter, Harriet Bickerstaff and husband, Henry, of Alva; three grandchildren, Ryan Bickerstaff and wife, Jennifer, of Mountain View, California, Sarah Bickerstaff of Omaha, Nebraska, and Debbie Minden and husband, Ralph, of Gardner, Kansas; and one great granddaughter, Reagan Bickerstaff. Memorial contributions may be made through the funeral home to Bank It.

The family of Dorothy Regina Higham created this Life Tributes page to make it easy to share your memories.

Graveside services for Dorothy Higham will be 1:30 p.m. Wednesday,...

Send flowers to the Higham family.