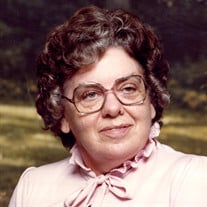 Funeral services for Dorothy Mae Kragh will be 2:00 p.m. Wednesday, March 8, 2017, at the Waynoka Church of God with Pastor Ken Higgins officiating. Interment will be in the Waynoka Municipal Cemetery under the direction of Marshall Funeral Home of Alva. Dorothy Mae Kragh, daughter of the late W. Ross and Anna Marie (Peyton) Harris, was born April 7, 1925, in Waynoka, Oklahoma, and passed away March 5, 2017, in Alva, Oklahoma, at the age of 91 years, 10 months, and 28 days. Dorothy attended a rural school in Major County and graduated from Waynoka High School. Then, she headed to Wichita to pursue her education, graduating from secretarial school. On November 7,1948, she was united in marriage to Cecil Lee Kragh in Waynoka. They made their home in Wichita until they returned to Waynoka in 1988. She was a member of the Westside Church of the Nazarene in Wichita and attended the Waynoka Church of God. She loved teaching Sunday School. Her husband and family has always been the center of her life and she loved being around her grandchildren. She also enjoyed baking and caring for her miniature horses with her husband, Lee. Besides her parents, she was preceded in death by her husband, Lee; four brothers, Harry Harris, Glenn Harris, Donald Harris, and Carl Harris; and one sister, Pauline Buttel. Dorothy is survived by one son, Gary Lee Kragh and wife, Andrea, of Waynoka, one daughter, Janet Faye (Kragh) McDonald and husband, Charles, of Alva; six grandchildren, Kendra Raymer and husband, Ron, of Oklahoma City, Krista Kragh of Clearwater, Kansas; Kyle Trimble and wife, Crystal, of Alton, Missouri, Jennifer Trimble of Dallas, Texas, Julie Trimble, of Arlington, Texas, and Gregory Trimble and wife, Clarissa, of Kiefer, Oklahoma; two great grandchildren; Lance Kragh of Clearwater, Kansas, and Dustin Trimble of Norman; other relatives and friends. Memorial contributions may be made through the funeral home to the Waynoka EMTs or the Oklahoma Medical Research Foundation for Alzhiemers Research.

Funeral services for Dorothy Mae Kragh will be 2:00 p.m. Wednesday, March 8, 2017, at the Waynoka Church of God with Pastor Ken Higgins officiating. Interment will be in the Waynoka Municipal Cemetery under the direction of Marshall Funeral... View Obituary & Service Information

The family of Dorothy Mae Kragh created this Life Tributes page to make it easy to share your memories.

Funeral services for Dorothy Mae Kragh will be 2:00 p.m. Wednesday,...

Send flowers to the Kragh family.