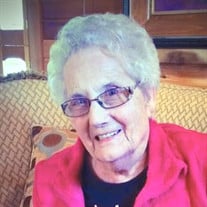 Celebration of Life services for Dorothy Mae Young will be Wednesday, June 5, 2019, at 2 p.m. in the Marshall Funeral Home Chapel with Dr. Ed Crenshaw, her nephew, officiating. Interment will be in the Alva Municipal Cemetery under the direction of Marshall Funeral Home of Alva. The casket will remain closed. Dorothy Mae Young, daughter of the late James T. and Mabel (Rogers) Rose was born May 3, 1930, in Canton, Oklahoma and passed away May 26, 2019, at the age of 89 years and 23 days. Dorothy attended Alva High School and on August 8, 1948, she was united in marriage to Buddy L. Young in Alva, Oklahoma. To this marriage six children were born. Dorothy was a seamstress, artist, carpenter, painter and wallpaper hanger. She had a love for fishing and gardening and had an understanding for the care of animals, so much so her neighbors called her “doc”. She found much joy in her children and in the teaching and guiding of their paths. Cooking for her family and others was her delight. Her cinnamon rolls are a bit of legend among family and friends. She probably is best known for her ability to solve problems. Folks knew her as the go-to person whenever a difficult situation arose. She was known to say, “Don’t let problems get in your way, just figure it out.” She was a friend to all. Her back door was seldom locked and most assuredly a hot pot of coffee was ready for a visit. She was a listener and true friend. All you had to do was ask and she would be by your side and often she was intuitive and would arrive without the need to ask. She endured many a dark day to rise again and again with a twinkle in her eye, an eyebrow gesture and a bit of humor to send you on your way. She was preceded in death by her parents and her husband, Buddy; her daughters Doris Magnuson and Linda Young; her son, Kim Dale Young; grandsons, Rhett A. Murrell and Shawn Moore; seven brothers, Mart, Everett, Carl, Charlie, Buster, Donald, and Richard Rose; one sister, Hope Ferrall; and her close friend and companion, Delbert McDonald. She is survived by her daughters, Sherry Gruber and husband, Tom, of Oklahoma City, OK, Donna Brown and husband, the late Lowell Brown, of Grove, OK, and Connie Moore and husband, Dr. Richard Moore, of Waynoka, OK; eleven grandchildren; nineteen great grandchildren; and four great, great grandchildren; brother, Roger Rose; and four sisters, Corine Ross, Lavina Rich, Rosalie Hatfield, and Betty Bowman; as well as numerous nieces and nephews and many friends. In memory of Dorothy’s love of gardening, memorial contributions can be made through Marshall Funeral Home to the Share Trust to build wheelchair accessible flower gardens at Share Convalescent Home.

Celebration of Life services for Dorothy Mae Young will be Wednesday, June 5, 2019, at 2 p.m. in the Marshall Funeral Home Chapel with Dr. Ed Crenshaw, her nephew, officiating. Interment will be in the Alva Municipal Cemetery under the direction... View Obituary & Service Information

The family of Dorothy Mae Young created this Life Tributes page to make it easy to share your memories.

Celebration of Life services for Dorothy Mae Young will be Wednesday,...

Send flowers to the Young family.