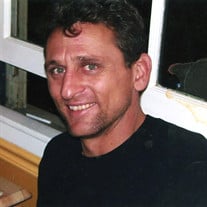 Funeral services for Dustin Arthur Goodrich will be 2:00 p.m. Tuesday, October 10, 2017, at the Alva First Presbyterian Church with Rev. Sarah Chivington-Buck officiating. Interment will be in the Alva Municipal Cemetery under the direction of Marshall Funeral Home of Alva. Dustin Arthur Goodrich, son of Chester Arthur and Yvette (Easterly) Goodrich, was born September 27, 1968, at Alva, Oklahoma, and passed away October 5, 2017, at Oklahoma City, Oklahoma, at the age of 49 years and 8 days. After Dustin graduated from Alva High School, he received a Bachelor of Science Degree in Psychology from NWOSU. While at Northwestern, he set many records in pole vaulting which still stand today. One year, he placed second in the nation in pole vaulting. He then went to SWOSU and received his Master’s Degree in Clinical Psychology. He was united in marriage to Maureen Mulcahy and they were blessed with two children, Devin and Drake. He moved to Colorado for a time where he practiced Psychology. He later returned to Alva where he joined his father in the family plumbing business. He was later united in marriage to Crystal Martin. He enjoyed motorcycles, especially dirt bikes, hunting and fishing, climbing and rappelling, and playing drums. He also loved animals. Dustin is survived by children, Devin Goodrich of Oklahoma City and Drake Goodrich of Henderson, Nevada; his parents, Chet and Yvette Goodrich of Alva; two sisters, Gaynell Goodrich of Wichita, and Kim Williamson and husband, David, of Oklahoma City; grandfather, Eldon Easterly of Alva; five nieces and nephews, Travis and Derek Courtright, and Tim, Callie, and Kelsi Williamson; other relatives and many friends. Memorial contributions may be made through the funeral home to NWOSU or Creature Concerns. Remembrances may be shared with the family at www.marshallfuneralhomes.com.

Funeral services for Dustin Arthur Goodrich will be 2:00 p.m. Tuesday, October 10, 2017, at the Alva First Presbyterian Church with Rev. Sarah Chivington-Buck officiating. Interment will be in the Alva Municipal Cemetery under the direction... View Obituary & Service Information

The family of Dustin Goodrich created this Life Tributes page to make it easy to share your memories.

Funeral services for Dustin Arthur Goodrich will be 2:00 p.m....

Send flowers to the Goodrich family.