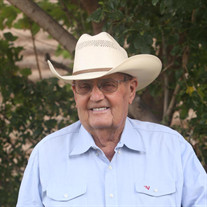 Private funeral services for E.F. Wise will be 10:00 a.m. Thursday, December 10, 2020 with Pastor Todd Finley and Scott Ware officiating. Public graveside services will be 11:00 a.m. Thursday, December 10, 2020, at the Freedom Cemetery under the direction of Marshall Funeral Home of Alva. Earl Frank (E.F.) Wise was born November 19, 1934 to Hood P. Wise and Mable Ford (Kilgore) Wise in the basement of his grandfather Frank Wise’s ranch house near Quitaque (pronounced Kittyquay), Texas. Heaven’s gate opened December 5th, 2020 at the age of 86 years, 15 days. E.F. was a big brother to his 4-year younger little sister, Mabel “Ann” Wise. Living close to his granddad’s ranch in the early years, E.F. was very excited when his granddad bought him his first horse, Peanut. At a very young age E.F. always wanted to be on a ranch and ride horses. E.F. attended school in Quitaque until 3rd grade and later he attended schools in Neelyword and Bladsaw. His granddad had purchased land in Pecos, Texas, west of Quitaque, and after his granddad passed away, the family moved there to take over the cotton farm. His dad continued farming and his mother worked at JC Penney’s until she retired many years later. While they made their permanent home in Pecos, Texas, he attended Pecos Schools until midway thru his Jr. year when he left without getting his report card! At the age of 17, he threw his saddle in his Army truck and took off to follow his dream of being a cowboy and working as a ranch hand. The ranch he worked on was 50 miles from town and had 15 to 20 cowboys. It was there he learned many traits of a cowboy, working and doctoring cattle, fixing fences and working on windmills. He remembered sleeping on the ground in his bedroll and eating meals from a chuckwagon. He would return home once a month to pack fresh clothes and take a bath before the next trip out to the ranch. His clothes were so soiled his mother just threw them away! He felt like he hit the jackpot when he received his three months summer pay of $300 all at one time! In 1952, E.F. married Mary Lou Pointer and to this union, Darla Dee (Jack) was born April 5, 1954. The marriage ended a few years later and Darla remained with her mother. E.F. joined the Army and served two years in peace time Germany and various other places. One of his duties was driving Jeeps for the officers. Once out of the service and back in Pecos, a close friend Vincent Duncan, introduce him to his sister Stena LaVerne Pearrow. On June 15, 1959, they were married. LaVerne was a widow with 3 small children and E.F. accepted the huge role as father for Larry age 4 1/2, Gary age 2 1/2 and Paula age 6 months. In the Spring of 1960, E.F. and his new family loaded up a few cows and his saddle horse and moved 500 miles away from family to the Freedom, Oklahoma area to work as a ranch hand for Jim Selman. In 1967, E.F. and LaVerne purchase the Harold Ferguson farm and ranch five miles north of Camp Houston. E.F. would willingly tell anyone, there was no way that he and LaVerne could have fulfilled their dream of owning their own ranch without the support of a few good-hearted men that helped them along the way. Once in a position to give back, he tried to help those in need. One of his favorite sayings “You’ve got to have Jesus in your hip pocket”! E.F. lost his life partner, LaVerne, of fifty-three years in October 2012. Since that time, E.F. has never given up his role as father to his family, soldier for his Lord and Savior and caretaker of his cows and ranch. E.F. was a true cowboy! Some say he was born a generation too late! E.F. was a U.S. Army Veteran, member of the Woodward Masonic Lodge #189, Freedom First United Methodist Church and was the Freedom Rodeo 2017 Old Cowhand. He was preceded in death by his parents Hood and Mable Wise, his wife LaVerne Wise, brother-in-law James Thomas and nephew Mal Thomas and his wife JoAnn Thomas, brother-in-law Vincent Duncan, brother & sister-in-law Conley & Gertha Campbell. E.F. is survived by his children Darla Jack Wise of Olympia, WA, Larry and wife Jody of Woodward, OK, Gary and wife Connie of Woodward, OK, Paula McMurphy and husband Randy of Alva, OK and sister Ann Thomas of Rogers, AR.; six grandchildren: Cody McMurphy and wife Megan of Alva, Casey McMurphy and wife Tracy of Canyon, TX, Jacey (Wise) Welch and husband Josh of Mannford, OK, Jared Wise and wife Carrie of Ardmore, OK, Tory (Wise) Hamlin of Jacksonville, FL, Joshua Wise of Shawnee, OK; eleven great grandkids: Brianne and Jaiden Dillon, Kailah Fessler, Brooklynn, Reiley and Ryder Wise, Avery, Reece, Layton, Grayson and Harper McMurphy, Howdy, Jay and Jagger Welch; two great-great grandkids: Aria and Abri Collins; a niece Paige Moreland and husband Kelly of Rogers, AR. Memorial contributions may be made through the Marshalls Funeral Home, Alva to the First United Methodist Church in Freedom, Freedom Ambulance, Freedom Museum or Freedom Fire Department.

The family of E.F. Wise created this Life Tributes page to make it easy to share your memories.

Send flowers to the Wise family.