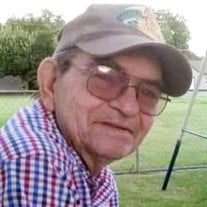 Funeral services for Earl Edward Barton will be 2:00 p.m. Friday, March 22, 2019, at the Driftwood Christian Church with Pastor Rod Rieger officiating. Interment will be in the Byron-Amorita Cemetery under the direction of Marshall Funeral Home of Alva. Earl Edward Barton, son of the late Edward Earl and Cathrine (Powell) Barton, was born December 15, 1938, in Ingersoll, Oklahoma, and passed away March 19, 2019, at Alva, Oklahoma, at the age of 80 years, 3 months, and 14 days. Earl attended Ingersoll School. He worked for 3 years at the Schobes Ranch near Cherokee. On February 10, 1963, he was united in marriage to Avis Isabelle Cloyd in Driftwood, Oklahoma. They were married 20 years but remained friends throughout his life. He lived in Burlington and was a custodian at Amorita School until it closed. He then worked at Burlington School as a custodian until 1983. At that time, he moved to Granada, Colorado, where he was a custodian until his retirement in 2004. In 2010 he returned to Alva where he made his home. Earl was a member of the Driftwood Christian Church where he served as a Deacon. From a young age, he loved racing, including drag racing in Wichita, racing on quarter mile dirt tracks, and later in life, go kart racing in Alva. He liked motorcycles and he and his wife would go on a lot of motorcycle runs. He also enjoyed fishing, camping, playing Pinochle, and was an avid OU fan. Besides his parents, he was preceded in death by two grandchildren, Shala Washington and Larmie Barton; and one great grandson, Zander Barton. Earl is survived by one son, Travis Earl Barton and wife, Deeon, of Driftwood; two daughters, Tammy Isabelle Stacey and partner, Travis Estes, of Prior Lake, Minnesota, and Tonya Chantelle Brown and husband, Jerry, of Alva, and their mother, Avis Johnson; eight grandchildren, Cory and Caleb Stacey, Devin, Briana, Shelby, Jordan, and Thayer Barton, and Shala Brown; 16 great grandchildren; his special friend who was more like a brother, Fred Elliot; and a special cousin, Corky Powell; other relatives and friends. Memorial contributions may be made through the funeral home to the Burlington School.

Funeral services for Earl Edward Barton will be 2:00 p.m. Friday, March 22, 2019, at the Driftwood Christian Church with Pastor Rod Rieger officiating. Interment will be in the Byron-Amorita Cemetery under the direction of Marshall Funeral... View Obituary & Service Information

The family of Earl Edward Barton created this Life Tributes page to make it easy to share your memories.

Funeral services for Earl Edward Barton will be 2:00 p.m. Friday,...

Send flowers to the Barton family.