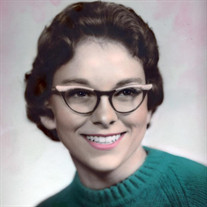 Graveside services for Earlene Carol Schafer will be 2:00 p.m. Friday, October 30, 2020, at the Homestead Cemetery with Rev. Jeremy Parker officiating. Interment is under the direction of Marshall Funeral Home of Alva. Earlene Carol Gaylord, daughter of the late Earl Gaylord and Letha (Bensch) Gaylord Sizemore, was born September 28, 1946, in Seiling, Oklahoma, and passed away October 23, 2020, in Alva, Oklahoma, at the age of 74 years and 25 days. After Earlene graduated from Seiling High School, she attended Northwestern Oklahoma State University and received her Bachelor’s Degree in Home Economics. On August 14, 1971, she was united in marriage to Gary Neal Schafer at the First Methodist Church in Seiling, where she was also baptized earlier in life. Gary and Earlene lived in multiple towns across Oklahoma while Gary was pursuing his Ag Ed and OSU Extension career. Earlene worked in various cafeterias until their son was born in 1984. She then became a dedicated homemaker. She was a member of the Homestead Bible Church. Besides her parents, she was preceded in death by her husband, Gary Schafer, and two brothers, Meredith Gaylord and Ron Gaylord. Earlene is survived by one son, Craig Schafer and wife, Jennifer, of Alva; two brothers, Scotty Gaylord and wife, Sandra of Fairview and Gary Gaylord and wife, Holly, of Jacktown; five grandchildren, Shelby Schafer, Clayse Schafer, Bane Schafer, Chauncey Schafer, and Adley Cait Schafer; other relatives and friends. In Lieu of flowers, memorial contributions may be made through the funeral home to the Homestead Church or the Homestead Cemetery.

The family of Earlene Carol Schafer created this Life Tributes page to make it easy to share your memories.

Graveside services for Earlene Carol Schafer will be 2:00 p.m....

Send flowers to the Schafer family.