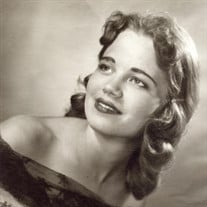 The funeral service for Earline Larson will be 10:00 a.m. Monday, November 8, 2021, at the Zion Lutheran Church with Pastor Tim Roggow officiating. Arrangements are under the direction of Marshall Funeral Home of Alva. Interment will be at a later date in Cheyenne, Wyoming. Earline Enette West Larson passed away peacefully on the 3rd day of November, 2021, at the Arbors in Enid, Oklahoma. She was born on the 4th day of October 1938, in Cheyenne Wyoming, to Helen Harriett (Campbell) and Earl Enoch West and baptized a child of Christ at St. Paul Lutheran Church. Earline had a younger sister – Sherline West. Even at a young age, Earline excelled at everything she set out to accomplish. Earline graduated from Cheyenne Central High School, in Cheyenne, Wyoming, in 1956 at the age of 16. Earline loved to sew and was very active in 4-H. From age 10 through college, she spent years sewing and tailoring clothing and won the Wyoming State 4-H Style Review and the Make it Yourself with Wool contests. She also played the violin and was an accomplished musician. Earline attended the University of Wyoming (UW) and majored in Home Economics. While in college, she played in the university orchestra. In 1959, she was crowned Miss Wyoming Wool. She was second runner-up in the National Competition. Earline graduated from UW in 3½ years and held down several jobs. She received a Bachelor of Science in Elementary Education. She later earned a Masters in Creative Arts and Learning from Leslie College in Boston, Massachusetts. Earline was also a feature model for the Cheyenne Tribune/Eagle, photographed in countless pictures with highlights published in a collection of photos by Francis S Brammar entitled “One-Shot Brammar”. In 1960, she married Robert William Larson Jr. and later divorced in 1987. Of the marriage, they had two daughters, Dawnine Enette Larson-Meyer, and Westline Helen Mae Larson Ritter. Earline began her teaching career as the home economics teacher at Lusk High School. She then taught elementary education in Cheyenne, both 2nd and 3rd grades, for 36 years. She had a passion for teaching and loved her job. After retirement, Earline worked for Dillards Department Store and excelled in sales. She received numerous awards for top salesperson in the Denver region. She described a deep love for serving her customers. Earline was blessed with amazing friends including her best friends Mona Burton and John Hruby, and Jeannie Throbro, Lynn and Jon Winkler, Joan Stout and Chad Burres. She loved to garden, walk and read to her grandchildren. Earline loved Christmas. The Christmas Eve candlelight service was a highlight. Christmas day at the Larson’s involved at least a 10-foot blue spruce decorated with an eclectic collection of antique, modern and hand-crafted ornaments placed in the middle of the large living room. She entertained several of her mother’s friends who didn’t have a place to celebrate. Her children and grandchildren had what seemed like countless presents; she shopped throughout the year to ensure there was a bounty of gifts. Her sons-in-law affectionately describe the day as traveling around Cheyenne picking up all the older ladies who needed a good meal at Christmas. It was a grand affair, and she loved serving the countless number a huge meal. Often the event ended in singing Christmas Carols, sipping hot Wassail or being entertained by the grandchildren. She also opened her heart to her daughter’s friends including Christine David who spent many holidays with the family. Earline was passionate about caring for and serving others. After the death of her mother, Helen, Earline devoted herself to the care of her special needs sister. In 2018, Earline and her dog Rosie moved to Alva, Oklahoma. She moved into the Homestead. While in Alva, Earline loved attending Zion Lutheran Church and being involved in Ruth Circle, PEO, and Seasoned Saints. She especially loved exercising with the Alva Fit Chicks and spending time with her caregivers, Debbie Geisler and her daughters Inslee and Leighton Glass, Carla Smart, Shirley Hook and Lalo Pinales. She enjoyed Carla’s sewing and craft projects, Shirley’s adventures, bingo, baking cookies, gardening, walking and even escaping from the Homestead. Although Earline was in Alva a short time and was ill, she was blessed by the community and truly loved her family and friends. Earline is preceded in death by her parents and sister. She is survived by her daughters, D. Enette Larson-Meyer and husband Dr. Mike Meyer, of Blacksburg, Virginia, and Westline Ritter and her husband, Douglas Ritter of Alva, Oklahoma. She is also survived by her beloved grandchildren, Rachel Nicole Golden and her husband, Jake Golden of Stillwater, Oklahoma; Grant Ritter and Garrett Ritter of Alva, Oklahoma; Lindsey Meyer of Billings Montana; Ian Meyer of Laramie, Wyoming; and Marlena Meyer of Bluefield, West Virginia. Earline is also survived by her friend, Judy Brown of Wyoming and by her special companions, Rosie the dog of Blacksburg, Virginia, and Rosie the cat, now the official housecat of the Arbors, Enid, Oklahoma. Earline truly loved the Lord and is rejoicing in Heaven.

The funeral service for Earline Larson will be 10:00 a.m. Monday, November 8, 2021, at the Zion Lutheran Church with Pastor Tim Roggow officiating. Arrangements are under the direction of Marshall Funeral Home of Alva. Interment will be at... View Obituary & Service Information

Send flowers to the Larson family.