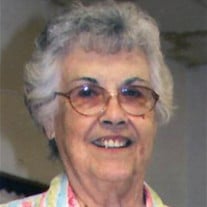 Funeral services for Easter Joyce Redgate will be 11:00 a.m. Thursday, August 30, 2018, at the Elm and Murrow Church of Christ with Bill David Walker officiating. Interment will be in the Waynoka Municipal Cemetery under the direction of Marshall Funeral Home of Waynoka, LLC. Easter Joyce Redgate, daughter of the late George Franklin and Edna Ruth (Whitcomb) Ellis, was born April 18, 1930, in White City, Florida, and passed away August 27, 2018, at Alva, Oklahoma, at the age of 88 years, 4 months, and 9 days. On January 5, 1950, she was united in marriage to Robert E. Redgate in Woodward, Oklahoma. They lived in Wichita for several years before moving to Waynoka in 2000. Joyce was employed by the hospital in Wichita as a nurse’s assistant. She truly enjoyed working in the maternity ward and caring for newborn infants. This fulfilled her passion for babies and small children. She next went to work for the city of Wichita. She was employed from 1974-1985 in various capacities. Joyce was a member of the Elm and Murrow Church of Christ. Joyce absolutely adored babies and children. She spoke so often of her own grandchildren and her five great grandchildren and looked forward to having them being part of each of her days. She also enjoyed crocheting and quilting. Besides her parents, she was preceded in death by her husband, Bob; two sisters, Yvonne Dodge and Dorothy Roach; and one brother, Charles Ellis. Joyce is survived by two sons, Lon Redgate and wife, Elaine, of Wichita, and Paul Redgate of Wichita; two sisters, June Wright of Blanchard, and Jeannie Kysar of Waynoka; two granddaughters, Amber Criswell and husband, Caleb, of Alva and Elizabeth Solomon and husband, Keith, of Waynoka; five great-grandchildren, Michael, Thomas, Christopher, and Brooklyn Solomon, all of Waynoka and Cason Criswell of Alva; other relatives and many friends. Memorial contributions may be made through the funeral home to the Elm and Murrow Church of Christ.

Funeral services for Easter Joyce Redgate will be 11:00 a.m. Thursday, August 30, 2018, at the Elm and Murrow Church of Christ with Bill David Walker officiating. Interment will be in the Waynoka Municipal Cemetery under the direction of Marshall... View Obituary & Service Information

The family of Easter Joyce Redgate created this Life Tributes page to make it easy to share your memories.

Send flowers to the Redgate family.