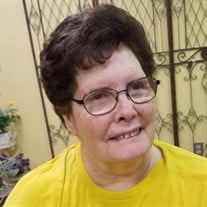 Funeral services for Edna Joyce Rutledge will be held for the family at 3:00 p.m. Monday, May 11, 2020, at the Marshall Funeral Home Chapel with Rev. Gordon Jantz officiating. Interment will be in the Short Springs Cemetery under the direction of Marshall Funeral Home of Alva. Visitation will be at the funeral home Saturday from 11:00 a.m. to 7:00 p.m., Sunday from 1:00 p.m. to 7:00 p.m., and Monday from 8:00 until service time. Edna Joyce Rutledge, daughter of the late William Asberry and Olivia Bane (Woods) Glausier, was born July 31, 1942, in Moultry, Georgia, and passed away May 7, 2020, in Enid, Oklahoma, at the age of 77 years, nine months, and six days. Joyce attended school at Sale City, Georgia, and graduated from Moultry High School in Moultry, Georgia. On May 31, 1960, she was united in marriage to Curtis Lee Drew Rutledge at Moultry, Georgia, on July 9, 1960. After marrying Curtis, who was in the Air Force, and spent eighteen years living in Miami, Florida. Tired of the crime in the big city, they decided to move to Alva, Oklahoma December 1979, where Curtis's parents and sisters lived. Curtis was hired by Panhandle Eastern and Joyce at Share Medical Center. They then had to move to Missouri in the mid-1990s, then to Brandon, Florida, in 1995. Due to her work ethics, she received employee of the month at Share Medical, an employee of the year at the University of Missouri hospital and again at Brandon Regional Hospital. Joyce was a member of the Assembly of God Church in Valrico, Florida. She deeply loved God and her church. She enjoyed her grandchildren, gardening, cooking, bingo, fishing, and traveling. Besides her parents, she was preceded in death by her husband, Curtis; one brother, Aubrey Glausier; and one granddaughter, Lindsey Brooke Rutledge. Joyce is survived by two children, Mark Rutledge and wife, Yvonne, of Waukomis, and Barbara Kerley and husband, Brad, of Gilbert, Arizona; one brother, Royce Glausier and wife, Linda, of Atlanta, Georgia; Mildred Frier and husband, Wallace, of Brandon, Florida, and Suzy Spencer of Plant City, Florida; and one sister-in-law, Joy Glausier of Orlando, Florida. She is also survived by three grandchildren, Robert Rutledge of Waukomis, Mattie Tomlinson and husband, Ryan, of Cleo Springs, and Sophia Rutledge of Waukomis; two great-grandchildren, Austin Curtis and Lindsey LeeAnn Rutledge of Waukomis; other relatives and friends. Memorial contributions may be made through the funeral home to the Oklahoma Medical Research Foundation for Alzheimer's research.

Funeral services for Edna Joyce Rutledge will be held for the family at 3:00 p.m. Monday, May 11, 2020, at the Marshall Funeral Home Chapel with Rev. Gordon Jantz officiating. Interment will be in the Short Springs Cemetery under the direction... View Obituary & Service Information

The family of Edna Joyce Rutledge created this Life Tributes page to make it easy to share your memories.

Funeral services for Edna Joyce Rutledge will be held for the...

Send flowers to the Rutledge family.