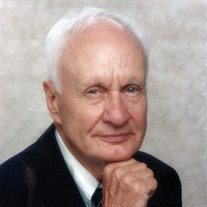 Elbert English Piper was born to Elbert and Ida English Piper in the hospital at Clayton, New Mexico and left this life in the Alva Hospital, Alva, OK on April 25, 2016 due to kidney disease and pneumonia. English grew up working on the two Piper ranches—one in New Mexico (Colfax Co.) and the other in Woods Co OK on land homesteaded by his grandparents, Thomas and Rachael Piper. He attended grade school at Green Valley School. He was a life-long Baptist. At the age of twelve he started school at Alva High—driving the twenty miles each way until his parents bought a house located where the current Baptist church parking lot is and he became a twelve year old bachelor until he was old enough to attend Northwestern State and live in a dormitory. At a Christmas Party in Vinson Hall, on -December 19, 1942 English had his first date with his future wife, Marceline Hewes. They married in less than two years and became farmers until he became a Marine. His served in CA at the Marine Corps Base, Camp Mathews, Camp Pendleton, and Ewa Field, Oahu, Hawaii where he was 1st chair, 1st clarinet in the West Coast Marine Corp band and the Dance Band at Ewa. Upon his honorable discharge at Camp Pendleton, he returned to Oklahoma and found that it was too late to enroll in engineering classes at OU. He found that the Moore, OK band director had resigned. English, with his musical background, applied and was hired, and went to the afternoon classes in Moore High School—where he was hardly older than many of the students! He began engineering classes at OU in 1947 and graduated with a BSEE in June 1950. He was a member of Tau Beta Pi, Sigma Tau, Eta Kappa Nu and IEEE. He found few jobs for a recent graduate even if he was in the top 10% of the graduating engineers. He entered OK Highway Patrol School. Before receiving his commission, he received an offer to join The Boeing Company as a research and development engineer. He worked at Boeing with ever increasing responsibilities in Wichita while he and Marceline welcomed their daughter Sharon Theresa (Teri). He was a Registered Professional Engineer and was President of the local IEEE chapter. He found time to get his pilot’s license and even flew the family to Las Vegas for a vacation. The family took fabulous vacations every year— visiting all but four states. English continued schooling at night and earned a MS in Electrical Engineering from Wichita State University in 1963. His Thesis is widely referenced to this day. General Electric, one of the contractors supporting NASA’s Apollo Program near Houston, made him a generous offer which he accepted, to become the Apollo Program Senior Engineer. He worked alongside world famous engineers and scientists as well as the astronauts for the next four years. While living there he took classes in pursuit of a PhD from University of Houston. While in the St. Louis airport, he met his former boss from Boeing who subsequently offered him a job to return to work for Boeing as a Helicopter Avionics Senior Engineer in Philadelphia. He accepted and the family eagerly relocated in 1967. English again took classes from University of Pennsylvania while working on a PhD. After several years English was offered a transfer to Boeing’s head office in Seattle where he was the AWACS Radar Senior Engineer. He accepted the position, but this time the family was without their daughter who was in school. The position was again exciting and interesting. As with much of his work, he could not talk about it at home. He did tell Marceline she could drive by Boeing Field and see what he was working on although he could not tell her what it was. It was a Boeing plane with a huge black sphere on it. Now, it is no secret, just an AWAC plane with a ray dome on top, all the better to see the world. After 46 days without a ray of sun and wet shoes at the door, the family felt they could do better (at least there was sunshine) and they sold their dream home in suburban Seattle and headed home to Woods County, OK. In addition to farming, English designed and supervised building a new home on the Piper Ranch west of Alva. Upon completion of that home, while Marceline recuperated from surgery in Wichita, English was contacted by some of his old friends still working at Boeing. They told him of the need for engineers with his background and ended up offering him a position. He returned to engineering for another 13 years while still farming on the weekends. While employed there he was named to the prestigious Who’s Who in Aviation and Aerospace, 1983 edition, published by Janes of London. After his second retirement in 1990 Marceline and English traveled extensively to Alaska, Canada, Europe, Russia and numerous locations throughout the US mainland. The two also attended OU football games continuously with season tickets for 37 years. English worked to expand the Woods Co Rural Water District to allow the family and neighbors to receive potable water for themselves and their livestock without having to haul it. This required extensive coordination with Senator Bartlett’s office to make this happen. English and Marceline also worked tirelessly to stop the use of open pits of waste from oil well drilling operations being placed on farmland in Woods Co. His surviving family, wife of over 72 years, Marceline, and daughter, Dr. Sharon, (Teri) Piper will forever mourn his loss. After this incredible life, English will remain in Woods Co in a crypt at the Alva City Cemetery after a private sundown entombment. Remembrances may be shared with the family at www.marshallfuneralhomes.com Memorial contributions may be made through the funeral home to the Free To Live Animal Sanctuary.

Elbert English Piper was born to Elbert and Ida English Piper in the hospital at Clayton, New Mexico and left this life in the Alva Hospital, Alva, OK on April 25, 2016 due to kidney disease and pneumonia. English grew up working on the two... View Obituary & Service Information

The family of Elbert English Piper created this Life Tributes page to make it easy to share your memories.

Send flowers to the Piper family.