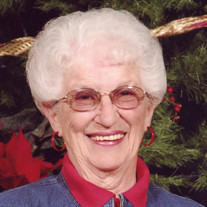 Memorial services for Elizabeth Waynell Wiebener will be at 11:00 a.m. Tuesday, March 10, 2020, at the Alva First Christian Church with Rev. Ron Pingelton and Pastor Drew Kirtley officiating, under the direction of Marshall Funeral Home of Alva. On July 31, 1932, at 9:30 p.m. in Anthony, Kansas, Elizabeth Waynell Mallory was born to A. Wayne and Opal (Munson) Mallory. She passed away March 3, 2020, in Alva, Oklahoma, at the age of 87 years, 7 months, and 4 days. The Mallory’s lived in Weatherford, a small town in the south central part of Oklahoma where she attended elementary school, often walking to school with the famous astronaut, Tom Stafford. She was named Little Miss Weatherford in 1939. In 1944, when Waynell was 12, her family moved to Alva where she completed her education at Alva High School, Class of 1950. She briefly attended Northwestern State College. On January 28, 1951, she was united in marriage to Robert Wiebener and shortly after he was drafted into the Army. After serving 15 months in the Korean War, he returned and they began farming the family land, and have continued farming most of their lives. Waynell returned to college in 1965, and graduated mid-term, 1969, with a Bachelor of Science Degree in Education. In 1969, she started her first teaching job at Washington Elementary School in Alva. That summer the family moved to Liberal, Kansas, where she taught fourth, fifth, and sixth grade. In 1976, they moved to Brighton, Colorado, where she taught math at Westlake Junior High in Broomfield, CO. After a long career, she retired in 1995. In 1996, she was asked to become an adjunct math instructor at Northwestern Oklahoma State University, where she taught math until her second and final retirement in 2010. Waynell was a member of the First Christian Church, the VFW Auxiliary, and the Alva Moose Lodge. She enjoyed cooking, sewing, and keeping harvest on track by driving the wheat truck, running for parts, and feeding the crew. She was an avid bowler traveling to many state and national bowling tournaments. She enjoyed watching all forms of football, especially her beloved Denver Broncos, and was an enthusiastic team manager in the family’s fantasy football league. Besides her parents, she was preceded in death by her sister, Donna Mai Wright, and her great grandson, Austin Mahagan. Waynell is survived by her husband, Robert, of Alva; one daughter Donna Mahagan and husband, Art, of Broomfield, Colorado three sons: John Wiebener and wife, Debbie, of Alva, Robert Wiebener, Jr. and wife, Laurie, of Highlands Ranch, Colorado, and James Wiebener and wife, Edith, of Alva; six grandchildren; three great-grandchildren; other relatives and many friends. Memorial contributions may be made through the funeral home to the Oklahoma Medical Research Foundation for Alzheimer’s research. Remembrances may be shared with the family at www.marshallfuneralhomes.com.

Memorial services for Elizabeth Waynell Wiebener will be at 11:00 a.m. Tuesday, March 10, 2020, at the Alva First Christian Church with Rev. Ron Pingelton and Pastor Drew Kirtley officiating, under the direction of Marshall Funeral Home of Alva. On... View Obituary & Service Information

The family of Elizabeth Waynell Wiebener created this Life Tributes page to make it easy to share your memories.

Send flowers to the Wiebener family.