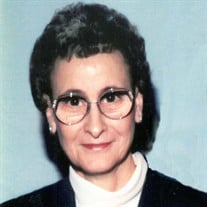 Private Graveside services for Elma Ileene Melton will be at the Alva Municipal Cemetery with Shonda Kooser and Burke Jones officiating. Interment is under the direction of Marshall Funeral Home of Alva. Elma Ileene Melton, daughter of the late Everett William and Alta Marie (Prigmore) Hofen, was born October 10, 1930, on the Hofen farm near Dacoma, Oklahoma, and passed away in Wichita, Kansas, December 9, 2018, at the age of 88 years, 1 month, and 29 days. Elma graduated from Dacoma High School with the Class of 1948. On October 10, 1950, she was united in marriage to James Albert Melton at her parents farm near Dacoma. While James served in the Army, she stayed in Alva where she worked at the abstract office, then for Munson Hatchery. After his discharge in 1953, they moved to Wichita to make their home. Elma was a member of the National Association of Letter Carriers Auxiliary. She and James loved traveling, and they visited all but nine states in their RV. Besides her parents, she was preceded in death by one son, Jimmy Melton; one brother, Everett William Hofen, Jr.; and one sister, Leveta Dotterer. Elma is survived by her husband of 68 years, James Melton of Wichita; three daughters, Judy Keener and husband, Lee Roy, of Derby, Kansas, Peggy Broussard of Friendswood, Texas, and Dianna (Dino) Stanley and husband, Darrell, of Wichita, Kansas. Also surviving are two brothers, Henry Lee Hofen of Cherokee, and Max Hofen and wife, Linda, of Waynoka; six sisters, Geneva Moore of Alva, Alvina Murray of Aline, Evelyn Kramp of Alva, Everetta Hall of Indianapolis, Indiana, Alfreda Reynolds and husband, J. D. of Cimarron, Kansas, and Josephine Ricks of Cherokee; 6 grandchildren; 13 great-grandchildren; other relatives and friends. In lieu of flowers, the family requests memorial contributions be made through the funeral home to the American Red Cross. Remembrances may be shared with the family at www.marshallfuneralhomes.com.

Private Graveside services for Elma Ileene Melton will be at the Alva Municipal Cemetery with Shonda Kooser and Burke Jones officiating. Interment is under the direction of Marshall Funeral Home of Alva. Elma Ileene Melton, daughter of the... View Obituary & Service Information

The family of Elma Ileene Melton created this Life Tributes page to make it easy to share your memories.

Private Graveside services for Elma Ileene Melton will be at...

Send flowers to the Melton family.