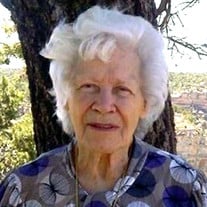 Graveside services for Eloise June Fleming will be 2:00 p.m. Wednesday, May 23, 2018, at the Alva Municipal Cemetery with Jay Tyree officiating. Interment will be in the Alva Municipal Cemetery under the direction of Marshall Funeral Home of Alva. Eloise June Fleming daughter of the late John Frank and Myrtle Maude (Barton) Kasbaum, was born June 12, 1922, in Stella, Oklahoma, and was translated from this place to her eternal rest May 21, 2018, at Alva, Oklahoma, at the age of 95 years, 11 months, and 9 days. June graduated from Norman High School. She met the love of her life, Walden Ralph Fleming, in Stroud, Oklahoma. On January 6, 1942, she was united in marriage to Walden in Pueblo, Colorado. After Walden served over 3 years in the military, he went to work for the Santa Fe Railroad. During that time, they lived in La Junta, Colorado, Clovis, New Mexico, Barstow, California, and Emporia, Kansas, where he was working when he retired. They then moved to Mountainair, New Mexico, then Alva. June will always be remembered as a strong women. She was committed to gardening, feeding livestock, gathering eggs, baking and taking in other’s closther to was and iron, thus supplementing dad’s income for the family of six without neglecting her dities as a homemaker. Notice, she was not the wife of a house, she was the maker of a home, her words on many an occasion. Every place June lived, she felt the need to be helping someone. She loved her family. She loved her grandkids. She loved her great grandkids. At 95 she wanted to even help raise her great great granddaughters. June was well known for her motto, “You are here to serve, not to be served.” Besides her parents, she was preceded in death by one infant son; three infant daughters; one brother, Samuel Kasbaum; four sisters, Geneva Bynum, Telma McMahon, Joyce Danner, and Edith Arnold; one grandson, Phillip Andrew Fleming; and one great grandchild. June is survived by three sons, Walden R. Fleming, Jr. and wife, Nancy, of Amarillo, Texas, Gary Alan Fleming and wife, Sharon, of Fresno, California, and Randall Lynn Fleming and wife, Terry, of Lake Halves City, Arizona; one daughter, Pamela Kay Moore and husband, Russell, of Basehor, Kansas; two brothers, John Kasbaum and Hank Kasbaum; and two sisters, Jeanie Wolfe and Patricia Hill; 14 grandchildren; 25 great grandchildren; and 7 great great grandchildren; other relatives and friends. Memorial contributions may be made through the funeral home to College Hill Church of Christ Bible Chair.

The family of Eloise June Fleming created this Life Tributes page to make it easy to share your memories.

Graveside services for Eloise June Fleming will be 2:00 p.m....

Send flowers to the Fleming family.