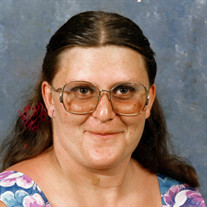 Funeral services for Elvia “Candy” Long will be 10:00 a.m. Saturday, June 24, 2017, at the First Baptist Church in Waynoka with Rev. David Shaw officiating. Interment with be in the Waynoka Municipal Cemetery under the direction of Marshall Funeral Home of Waynoka. Elvia “Candy” Long, one of seven children of a blended family, was the daughter of the late Sammy Lee Cell and Jonnie Kay Williams, born November 15, 1960, at Enid, Oklahoma, and passed away June 19, 2017, at her home surrounded by her family in Tulsa at the age of 56 years, 7 months, and 4 days. She was raised in Great Bend, Kansas, and eventually moved to Waynoka. Candy began having children at the young age of 14 and got married the following year to her wonderful husband of nearly 42 years. Candy worked as a nurse in the Waynoka area for several years before being diagnosed with brain tumors in her early 30's. She enjoyed going to the dirt track races on the weekends and some of her favorite hobbies were sewing and quilting. Her grandkids seemed to be the light of her life, and Candy would do anything she could for anyone at anytime.. Besides her mother and father, Candy was preceded in death by two daughters, Lorraina Kay Cell and Shala Lee Watkins; siblings, Sammy Lee Cell, Jr., Sandra Kay Bounds, and Buddy Carl Bence. Also preceding her in death was a nephew, Jerry Cell; her grandparents, Maxine and Skeet Cell, Elvie Bell, and Lorraine Baldrige. Candy is survived by her husband, Duane Long of Tulsa; her son, Phillip Long of Council Grove, Kansas; her daughter, Samantha Holbrook and husband, Marques, of Tulsa; her son-in-law, Jeremy Watkins and wife, Coralynn, of Armstrong, Iowa; a daughter-in-law, Marye Long of Tulsa; 9 grandkids; and many extended relatives and friends. Memorial contributions may be made in her memory to the funeral home.

Funeral services for Elvia &#8220;Candy&#8221; Long will be 10:00 a.m. Saturday, June 24, 2017, at the First Baptist Church in Waynoka with Rev. David Shaw officiating. Interment with be in the Waynoka Municipal Cemetery under the direction... View Obituary & Service Information

The family of Elvia "Candy" Lorain Long created this Life Tributes page to make it easy to share your memories.

Send flowers to the Long family.