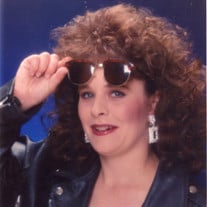 Funeral services for Emily Elaine Cunningham will be 2:00 p.m. Friday, November 3, 2017, at the Marshall Funeral Home Chapel with Rev. John Smith officiating. Interment will follow in the Alva Municipal Cemetery under the direction of Marshall Funeral Home of Alva. Emily Elaine Cunningham, daughter of Jonna (Varner) Hines and the late John Franklin Cunningham, was born June 30, 1971, at Alva, Oklahoma, and passed away October 31, 2017, at Kiowa, Kansas, at the age of 46 years, 4 months, and 1 day. Emily attended school in Alva and Midland, Texas, where she earned her GED. She worked at B&M in Midland in the oil field supply business. She retired in 2010 and moved to back to Alva in 2016 to be close to family. Emily loved music, especially county music and music from the 50's and 60's. She enjoyed sewing, making crafts, cooking, canning, camping and going to garage sales. She also loved spending time with her children and granddaughter. Besides her father, she was preceded in death by her grandparents, John Varner, Adeline Varner, and Charles and May Cunningham. Emily is survived by her mother, Jonna Varner Hines; son, James I. McDonald of Alva; two daughters, Elizabeth McDonald and KC Bursen of Odessa, Texas, and Brittany Thames of Odessa, Texas; one granddaughter, Angel Thames of Odessa; five brothers, Christopher Cunningham and wife, Alyssa of Midland, Texas, Bruce Cunningham and wife, Lisa of Midland, John Cunningham and wife, Michelle of Alva, Victor Cunningham of Midland, Jere´ Cunningham of Alva; one sister, Mary Duppenthaler and husband John of Odessa; a sister-in-law, Sandy Meyer of St. Louis, Missouri; and many other aunts, uncles, cousins, nieces, and nephews and friends. Emily would like to give a special thank you and recognition to the following people for their physical, emotional, and financial help in her time of need: John and Michelle Cunningham, Jere´ Cunningham, Ken Sellars, and Brianna Duppenthaler. Memorial Contributions may be made through the funeral home to the American Cancer Society.

Funeral services for Emily Elaine Cunningham will be 2:00 p.m. Friday, November 3, 2017, at the Marshall Funeral Home Chapel with Rev. John Smith officiating. Interment will follow in the Alva Municipal Cemetery under the direction of Marshall... View Obituary & Service Information

The family of Emily Elaine Cunningham created this Life Tributes page to make it easy to share your memories.

Funeral services for Emily Elaine Cunningham will be 2:00 p.m....