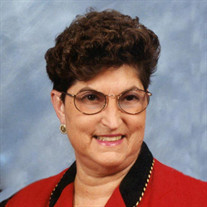 Funeral services for Jean Gottsch will be 10:00 a.m., Tuesday, June 8, 2021, at Zion Lutheran Church with Pastor Timothy Roggow officiating. Interment will follow at Zion Lutheran Cemetery under the direction of Marshall Funeral Home of Alva. Emma Jean Molz, daughter of the late Paul John Molz and Gladys Emma (Reed) Molz, was born August 3, 1935, at Kiowa, Kansas, and passed away June 3, 2021, at Grove, at the age of 85 years and 10 months. Jean was raised near Hardtner, graduating from Kiowa High School in 1953. She attended Oklahoma State University and later transferred to Northwestern State College, graduating in 1957. She was united in marriage to Carl Petermann on August 12, 1956, at Kiowa. They lived in the Woods County area, later moving to Alva where they raised their family. Carl passed away September 14, 2002. Jean later married Harold Gottsch on July 25, 2009, at Woodward. They made their home in Hutchinson, Kansas, until Harold’s death on October 8, 2020. Jean lived the last several months in Grove to be near her children. Jean was a member of the Zion Lutheran Church. She worked many years for Oklahoma Natural Gas as a area operating clerk. She was a member of the LWML, the Republican Women, and the Business and Professional Women’s organization, holding many offices. She enjoyed playing bridge and pitch and traveling, taking many cruises. Besides her parents, she was preceded in death by her husbands, Carl and Harold; her sister, Dona Mae Gottsch; and her son-in-law, Troy Neagle. She is survived by her children, Lisa Neagle of Wagoner, David Petermann and wife, Romona, of Grove, and Bryan Petermann and wife, Kathy, of Grove; six grandchildren, Amber Burge of Checotah, Bryon Neagle and wife, Shelby, of Tulsa, Abby Babb and husband, Gary, of Elk City, Matthew Petermann of San Jose, California, Destiny Del Los Santos and husband, Andy, of Broken Arrow, and Austin Petermann of Tulsa; great grandchildren; many nieces and nephews, other relatives and friends. Memorial contributions may be made through the funeral home to the Zion Lutheran Church.

The family of Emma "Jean" Petermann Gottsch created this Life Tributes page to make it easy to share your memories.