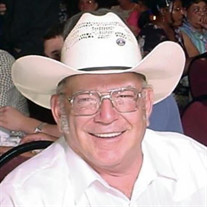 Memorial services for Ernest “Ernie” Rader will be 1:00 p.m. Tuesday, December 8, 2020, at the Freedom Christian Church with Pastor Mark Kinkel officiating. Arrangements are under the direction of Marshall Funeral Home of Alva. Ernest “Ernie” Rader, son of the late Leonard Harry and Faye Eleanor (Strong) Rader, was born March 6, 1944, in Freedom, Oklahoma, and passed away December 2, 2020, in Enid, Oklahoma, at the age of 76 years, 8 months, and 26 days. Ernie attended the Farry School. Immediately after high school, he joined the Alva Fire Department and began working for ONEOK. After a short time, he decided he could only do justice to one job and chose his position at ONEOK, where he worked 40 years until his retirement. He was united in marriage to Jeanne Vincent and to this union three sons were born, Vaughn, Darrin, and Dale. He also farmed and ranched throughout his life. On April 6, 1991, he was united in marriage to Mildred Faye Ent on the Rader Ranch, and three more children were brought into the family, Ricky, Connie, and Becky. They continued living on the Rader Ranch. Ernie knew what was important in life. He knew that what was important was “how much fun you had”, who you had it with, and what you ate afterwards. Besides his parents, he was preceded in death by his wife, Millie; and one sister, Doris Shelite. Ernie is survived by six children, Vaughn Rader and wife, Kim, of Alva, Darrin Rader and wife, Michelle, of Orlando, Oklahoma, and Dale Rader of Columbia Falls, Montana, Ricky Lawrence and wife, Kara, of Falcon, Colorado, Connie Lawrence of Waukomis, and Becky Lawrence of Enid; and one brother, Leroy Rader. Also surviving are eleven grandchildren, Riley Rader, Raegan (Matt) Tune, Mitchell (Hayden) Rader, Logan Rader, Tyler (Misty) Lawrence, Lacy Campbell, Kim (Damien) Wedel, Devin Coffey, Colton (Emily) Lawrence, Zachary Lawrence, and Bella Lawrence; and eight great-grandchildren, Traden Tune, Tate Tune, Brayden Lawrence, Carson Campbell, Landyn Coffey, Abel Wedel, Jaxon Wedel, and Sophie Wedel; other relatives and many friends. In lieu of flowers, memorial contributions may be made through the funeral home to the Freedom Fire Department or the Freedom Ambulance Service.

The family of Ernest Eugene "Ernie" Rader created this Life Tributes page to make it easy to share your memories.

Send flowers to the Rader family.