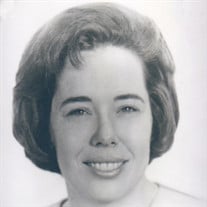 A funeral service for Evelyn will be 3:00 p.m. Friday, November 29, 2019, at the Marshall Funeral Home Chapel with Rev. Bob Brown officiating. She will later be interred beside her parents in the Ensor Family Graveyard in Elizabethton, Tennessee. Evelyn Delilah (Ensor) Brizzolara passed away at Share Medical Center in Alva on November 24, 2019 after a short illness. She was a devoted wife and loving mother; she was a friend to all whose lives she touched. She was a homemaker, and an active community volunteer. Born in Alva on May 10, 1934, she was the daughter of Dr. Daniel B. and Mrs. Grace Ensor. Her very early years were spent in Hopeton where her father had a medical practice. Her family relocated to Alva where she finished school and graduated with the Class of 1951. After attending Northwestern Oklahoma State University for her freshman year, she transferred to Sophie Newcomb College in New Orleans, Louisiana where she earned a B.A. in Anthropology and became a life long jazz enthusiast. Evelyn traveled extensively in Europe with her mother during and shortly after her college days. While in France, she was frequently mistaken for the actress Leslie Caron. She and her mother enjoyed the offer of free taxi rides and other tokens resulting from this mistaken identity. Always adventurous, she later explored behind the Iron Curtain in communist Yugoslavia. She married Raymond E. Tompkins with whom she had three children. She worked as an advocate in the children’s court in Oklahoma County. She met and married Harold (Hal) Brizzolara from San Mateo, California in 1964. Hal and Evelyn and their children settled in northern California where they were blessed with the birth of another son. Evelyn made a loving home and set a model of community service for her children. An active Pink Lady volunteer for the local hospital as well as a Cub Scout/Girl Scout leader, she served for a number of years on the Nevada County School Board and oversaw the building of a new elementary school for the community. She was also active in Republican politics. In 1974 Evelyn, Hal,and their children moved to Alva where Hal had purchased an accounting practice. Evelyn was a longtime member of P.E.O, the Cherokee Outlet Chapter of the Daughters of the American Revolution, the Order of the Eastern Star of the State of Oklahoma, and Holly Club. She continued volunteer service through Meals-on-Wheels, as chairman of the Alva Cemetery Board, and other public and church related activities. For many years, she served on the board of directors of the Hopeton State Bank. She was an avid crafter and quilter, winning many awards for her quilts. An enthusiastic book collector of signed, first edition mysteries and espionage fiction, she traveled extensively with Hal throughout the Southwest and California seeking out treasures for their collection. Evelyn was preceded in death by her parents and her elder sister, Dana, as well as by her infant son, Michael. She is survived by her husband, Hal, of the home, and her children Chris Brizzolara of Santa Monica, California, Kay Brizzolara and husband PJ Pronger III of Amarillo, Texas, and Jeff Brizzolara and his wife Kelli of Dallas, Texas, and their respective children: PJ Pronger IV and wife Beth of Amarillo, Texas, Lauren Pronger of Philadelphia, Pennsylvania, and Parker, Presley, and Palmer Brizzolara of Dallas, Texas. In lieu of flowers the family suggest donations to the Free to Live Animal Sanctuary, P.O. Box 5884, Edmond, OK 73083 or Second Chance Animal Sanctuary, Inc, P.O. Box 1266, Norman, OK 73070, or a charity of your choice. Remembrances may be shared with the family at www.marshallfuneralhomes.com. "For I am convinced that neither death, nor life, nor angels, nor rulers, nor things present, nor things to come, nor powers, nor height, nor depth, nor anything else in all creation, will be able to separate us from the love of God in Christ Jesus our Lord." Romans 8:38-39

A funeral service for Evelyn will be 3:00 p.m. Friday, November 29, 2019, at the Marshall Funeral Home Chapel with Rev. Bob Brown officiating. She will later be interred beside her parents in the Ensor Family Graveyard in Elizabethton, Tennessee. Evelyn... View Obituary & Service Information

The family of Evelyn Brizzolara created this Life Tributes page to make it easy to share your memories.

Send flowers to the Brizzolara family.