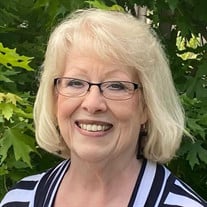 Services for Evelyn Jean Hofen will be Tuesday, February 15, 2022, at 2:00 p.m. at the Hopeton Church with Rev. Marion Hadsell officiating. Burial will be at the Alva Cemetery under the direction of Marshall Funeral Home. Evelyn Jean was the daughter of Wanda Lee Haight Martin and Wesley Gene “Bud” Martin and was born on February 7, 1948, at Alva General Hospital. She passed away on February 11, 2022, at the age of 74 years, and 4 days. She attended Alva Schools and graduated in May 1966. She then attended Northwestern Oklahoma State University and graduated in 1970 with a B.S. in Education. On March 12, 1971, she was united in marriage to Elwyn Hofen. She taught keyboarding and business at Cherokee High School for a number of years before moving to Alva and working in the Woods County Extension Office. For many years Evelyn was the truck driver for Hofen Farms wheat harvest. As the boys grew older she promoted herself to harvest chef and sometimes a parts courier. Later, Evelyn joined the Alva Vo-Tech staff as a Business and Computer teacher retiring from there in 2003. She then spent several more years substitute teaching, and rejoined the administrative offices at the Career Tech before retiring a second time in 2012. Besides teaching, Evelyn enjoyed tole painting, decorating the family home, hosting family dinners and other events. One of her proudest achievements was her yard and garden featured in an episode of Oklahoma Gardening. She loved cooking and trying new recipes. She loved spending time with her Bible studying the Word, and did so every day. She enjoyed sharing her Faith with everyone she encountered. She was a member and officer of the Alva Tulip Garden Club. Most of all, Evelyn took pride in being a wife, sister, mother, grandmother, and great-grandmother. Besides serving Christ, the things that mattered most in her life were her family. She loved to attend concerts, plays, ballgames, and recitals of her children, grandchildren and great-grandchildren. Evelyn Jean was preceded in death by her parents Wesley Gene “Bud” and Sue Martin, and Wanda Lee Martin, and brother-in-law David Shearer. Evelyn is survived by her husband Elwyn, of Alva, sister Pat Shearer from Tulsa, sons Brian and Lynn Hofen of Alva, Brent and Heather Hofen of Portland, Oregon, and Brad and Ruchita Hofen of Nagpur, India. She is also survived by her grandchildren that she was so proud of, Braden, Brooks, and Madison Hofen, Kalynn Samples of Oklahoma; Emma, Blake and Lauren of Portland, Oregon, and Cassia and Candace Hofen of Nagpur, India, Briana and Michaelea Samples of Texas; a number of great-grandchildren, nieces and nephews and other relatives and friends. Memorial contributions may be made through the funeral home to the Hopeton Church where she attended and served.

Services for Evelyn Jean Hofen will be Tuesday, February 15, 2022, at 2:00 p.m. at the Hopeton Church with Rev. Marion Hadsell officiating. Burial will be at the Alva Cemetery under the direction of Marshall Funeral Home. Evelyn Jean was... View Obituary & Service Information

Services for Evelyn Jean Hofen will be Tuesday, February 15,...

Send flowers to the Hofen family.