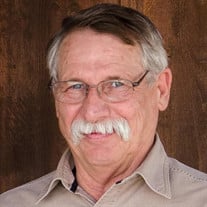 Funeral services for Ezra Gene Greb will be 10:00 a.m. Thursday, June 11, 2020, at the Dacoma Methodist Church with Joe Woods officiating. Interment will be in the Dacoma Union Center Cemetery under the direction of Marshall Funeral Home of Alva. The service will be live streamed on the Marshall Funeral Home Facebook page. Ezra Gene Greb, son of the late Milton Malvin and Helen June (Reisig) Greb, was born June 30, 1952, in Okeene, Oklahoma, and passed away June 5, 2020, in Oklahoma City, Oklahoma, at the age of 67 years, 11 months, and 5 days. Through his childhood years, Gene lived in several Oklahoma Communities and attended school at Douglas, Fairmont, Garber, and Carrier, graduating with the Carrier Class of 1970. On November 21, 1970, Gene was united in marriage to Jacqualine Reinhart. From this marriage two children were born. Gene was united in marriage to Lynni Rojean Kassik on September 6, 1998, in Eureka Springs, Arkansas. From this union, another child was added whom he called son. Gene was an expert diesel mechanic all of his life. Over the years, he was employed by Sturgeon’s Corner, Long Equipment, Holderby Equipment, and P&K Equipment. Gene and Lynni opened their own independent diesel shop in Dacoma, Oklahoma, where they resided after marriage. In 2010, Gene, Lynni, and Koy began farming the K&K family farms together while continuing to operate Greb Diesel Shop. Some of Gene’s hobbies and loves included restoring vintage equipment, remodeling their home, adding to the yard, camping, fishing, deer hunting, football, working on the farm, raising bottle calves, and so much more. Gene also made himself available to assist Cinnamon Creek at most all times when needed. However, Gene’s true love was his family. He enjoyed attending his grandchildren’s events such as football, soccer, baseball, and spelling bees. He also truly loved and was known for playing jokes, teasing, pranking, pestering, and annoying family and friends. Many, many stories can be told. He touched so many lives throughout his life and work. Besides his parents, Gene was preceded in death by his beloved pet, Otis. Gene is survived by his wife, Lynni, of the home; a son, Chad and wife, Tara, of Helena; a daughter, Melyssa and special partner, Jackie Richey II, of Woodward; a son, Koy Koehn of Dacoma; three grandchildren, Kaitlyn Nichole, Sadler Jack, and Abery Rae; one brother, Jeff Greb and wife, Yvonne, of Goltry; three sisters, Judy Marek of Wichita, Kansas, and Ginger Pitman and husband, Tony of Waukomis, and Vicki Cumpston and husband, Wallace, of Wichita, Kansas; his parents-in-law, Roger and Pauline Kassik of Dacoma; a sister extra Dawn Burkes of Dacoma; along with many loved nephews, nieces, cousins, uncles, and aunts. Memorial contributions may be made through the funeral home to the Share Medical Center Foundation, Dacoma Methodist Church, or the Dacoma Fire Department.

Funeral services for Ezra Gene Greb will be 10:00 a.m. Thursday, June 11, 2020, at the Dacoma Methodist Church with Joe Woods officiating. Interment will be in the Dacoma Union Center Cemetery under the direction of Marshall Funeral Home of... View Obituary & Service Information

The family of Ezra Gene Greb created this Life Tributes page to make it easy to share your memories.

Send flowers to the Greb family.