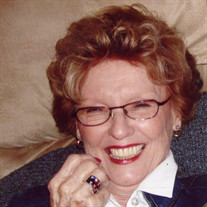 Floy Elizabeth “Sis Matthews, daughter of the late Dean Ray and Opal (Harris) Pippin, was born December 13, 1929, in Bryan, Texas, and passed away July 5, 2021, in Wichita, Kansas, at the age of 91 years, 6 months, and 22 days. At her request there will be no service. Sis was cremated and long with her husband, Bud, will be buried in the family plot in Bryan, Texas at a later date. Sis spent all her school years in Bryan attending Stephen F. Austin High School where she was elected “Most Popular” for three years, graduating with the Class of 1947. She then attended Sam Houston State University in Huntsville, Texas. She was employed at several newspapers, then as a secretary at Texas A&M where she met and married Norman “Bud” Matthews who was also employed at A&M in the Athletic Department as a gymnastic coach and teacher. Two years into their marriage their daughter, Trayce was born. In 1958, they moved to Alva where Bud taught at Northwestern Oklahoma State University. Sis was an accomplished photographer, seamstress, history buff, and found joy as an amateur rock hound. One of her favorite activities was playing bridge with her bridge club. While Bud was studying at Oklahoma State University for his doctorate, she worked as a typist for doctoral candidates thesis. She forged fiercely loyal and enduring friendships. She loved traveling and being with her family that she adored. Her quick wit and humor will be remembered and sorely missed by those she leaves behind. Sis is survived by her daughter, Trayce Lohmann and husband, Randy, of Kiowa, Kansas; her twin brother, Ray Dean Pippin of Fort Worth, Texas; two grandchildren, Adria Simmons and husband, Derek, of Rose Hill, Kansas, and Garrett Lohmann and wife, Emily, of Hardtner, Kansas; four great grandchildren, Brock and Grace Simmons, both of Rose Hill, Kansas, and Lexie and Jordy Lohmann, both of Hardtner, Kansas; other relatives and friends. Memorial contributions may be made through the funeral home to the Oklahoma Medical Research Foundation for Alzheimer’s Research or to the NWOSU Foundation.

The family of Floy Elizabeth "Sis" Matthews created this Life Tributes page to make it easy to share your memories.

Send flowers to the Matthews family.