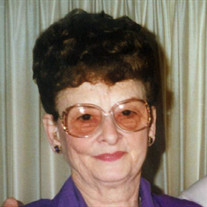 Funeral services for Floy Lorraine Whittet will be 10:30 a.m., Tuesday, January 3, 2017, at the Dacoma Church of God with Pastor Connie Kinnard officiating. Interment will be in Union Center Cemetery under the direction of Marshall Funeral Home of Alva. How do you express, in just a few words, so many feelings about someone who was your everything? Floy Whittet was so much to so many. A sister, daughter, wife, mother, grandmother, and friend. She taught us what it meant to truly love someone unconditionally and to give your entire heart and soul to them, because that is exactly what she did for us. Floy Lorriane Jenlink was born to Albert and Eva VanDeusen Jenlink on December 19, 1923, and passed away the morning of December 28, 2016. She was the second of their four children. Floy attended and graduated Cherokee Public Schools then went on to attend Southwestern Oklahoma State University to study art. On December 8, 1941, college life came to a halt as World War II began. Women were needed to fill the jobs that were traditionally men’s work and soon, she traded her skirts for pants and went to work. Floy took a test for Cessna and upon passing was hired to work on war planes as a “Rosie Riveter,” while her beloved served in the armed forces. When her soldier came home, she soon married him. Billy Wayne Whittet and Floy Lorraine Jenlink were united in marriage on February 27,1947, at the Methodist Parsonage at Cherokee. They really were soul mates, as she has missed him so after he passed in 2005. Floy and Billy made their home in Dacoma all their lives together except for five years in which they lived in Wichita, Kansas. They had two children, Douglas Lynn and Debra Lee. Billy and Floy owned and operated Whittet’s Country Store and Cowboy Grill in Dacoma for 45 years. During that time, they made Billy Burgers and Billy’s Chili famous statewide. Floy really enjoyed the beauty that God created. She took time to stop and smell the roses. She was an artist – and proudly displayed her art on the walls of Whittet’s Country Store. Many of her paintings hang today in the homes of the people who loved her dearly. Besides her parents, she was preceded in death by her husband of 58 years, Billy Wayne Whittet; her sister and brother-in-law Maycel and Murel Bontrager; her brother and sister-in-law, Glenn and Helen Jenlink; brother-in-law Bub McFadin, and a great-granddaughter, Reagan Marie Crouch. She is survived by her son and daughter-in-law Doug and Rosemary Whittet; her daughter Debbie Lee Carson; five grandchildren - Jennifer and her husband Dale Crouch of Wichita, KS; Danny Whittet of Cherokee, OK; Traci and her husband Tony Kenyon of Shawnee, OK; Christopher Carson and his wife Danielle of Fairview, OK; and Casey Carson and his wife Taylor of Nash, OK. Ten Great-grandchildren; Reece and Leah Crouch; Brook and Derek Whittet; Brycen, Jack, Ayven, Eva, and Brook Kenyon; and Rhett Carson; sister Joan McFadin, and many nieces, nephews, other relatives and friends. Service to celebrate her life will be held at the Dacoma Church of God on Tuesday, January 3, 2017 at 10:30am.

Funeral services for Floy Lorraine Whittet will be 10:30 a.m., Tuesday, January 3, 2017, at the Dacoma Church of God with Pastor Connie Kinnard officiating. Interment will be in Union Center Cemetery under the direction of Marshall Funeral Home... View Obituary & Service Information

The family of Floy Lorraine Whittet created this Life Tributes page to make it easy to share your memories.

Send flowers to the Whittet family.