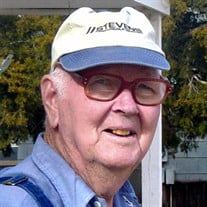 Funeral services for Floyd Ray Smith will be 11:00 a.m. Saturday, September 30, 2017, at the Waynoka Assembly of God Church with Rev. Terry Phipps officiating. Interment will be in the Waynoka Municipal Cemetery under the direction of Marshall Funeral Home of Waynoka, LLC. Floyd Ray Smith, son of the late Wesley Whitfield and Charlotte Isabel (Sayre) Smith, was born August 31, 1922, at Carmen, Oklahoma, and passed away September 27, 2017, at Alva, Oklahoma, at the age of 95 years and 26 days. Floyd attended Highland Schools. He enlisted in the United States Navy where he proudly served his country until his retirement after 20 years. On July 15, 1946, he was united in marriage to Geneva Ruth Morris at Medicine Lodge, Kansas. After he retired from the Navy in 1961, he returned to the farm where he farmed and ranched. He and Geneva moved to Waynoka in 1993. He also worked in construction and as a concrete finisher. He continued to pour and finish concrete until the age of 85. Floyd was a member of the American Legion, the Fleet Reserve Association, and the Waynoka Saddle Club. He loved woodworking, making tables and toys for many of the kids. He also enjoyed hunting coyotes. His greatest joy was playing and reading to his grandchildren. Besides his parents, he was preceded in death by his wife, Geneva; and five brothers, Roy, Melvin, Carl, Russell, and Clifford Smith. Floyd is survived by his son, Marvin R. Smith and wife, Lois, of Waynoka; three daughters, Elaine Willson and husband, Alvin, of Owasso, Oklahoma, Irma Phipps and husband, Terry, of Waxahachie, Texas, and Charla B. Sheeran and husband, Patrick, of Aledo, Texas; and one sister, Lois Layton and husband, Gene, of Enid. Also surviving are 8 grandchildren, Tabetha Reeser and husband, Michael, of Enid, Stephanie Decker and husband, Charles, of Brownwood, Texas, Bill Willson and wife, Teresa, of Owasso, Edwina Adams and husband, Jason, of Wheaton, Illinois, Travis Phipps and wife, Brandy, of Wylie, Texas, Katrina Smith of College Station, Texas, Tracie Benningfield and husband, Tommy, of Waxahachie, Texas, and Alyssa Sheeran of Aledo, Texas; 18 great grandchildren, 17 great great grandchildren; other relatives and friends. Memorial contributions may be made through the funeral home to the Disabled American Veterans or the Wounded Warrior Project.

Funeral services for Floyd Ray Smith will be 11:00 a.m. Saturday, September 30, 2017, at the Waynoka Assembly of God Church with Rev. Terry Phipps officiating. Interment will be in the Waynoka Municipal Cemetery under the direction of Marshall... View Obituary & Service Information

The family of Floyd Ray Smith created this Life Tributes page to make it easy to share your memories.