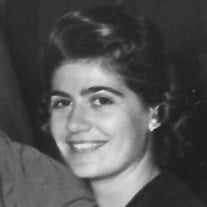 Fofe’s life ended peacefully on February 6, 2020, at the age of 91 years, when she went home to be with her Lord and Savior and reunited with Walter Cunningham, her spouse of 46 years, her parents, Nikolaos Kouvelopoulos and Irene Likari Kouvelopoulou and many other family and friends who preceded her. Fofe was born in Athens, Greece and endured a difficult childhood disrupted by foreign occupation, World War II, and civil war. After World War II, while working for the British at the Navy Army Air Force Institute (NAAFI), Fofe met and later married Walter Cunningham who was in the United States Air Force stationed in Athens, Greece. To their union three children were born: Audrey, Myron, and Donald. Upon Walter’s military retirement, the family moved to Walter’s hometown of Alva, Oklahoma. Life for Fofe centered on love of family and family meant cooking and sharing great foods with others. Fofe gave tirelessly to her children and later to her grandchildren. She often said she loved every moment of being a grandmother. Fofe worked at Northwestern Oklahoma State University where she developed many lasting friendships and retired in 1990. Fofe was always proud to think in some small way she made a difference in the life of each student she met. Fofe was never a relaxer and her energy was spent in countless hours of cooking, baking, knitting, crocheting, gardening, walking, playing cards and bingo. She loved sharing her homemade goodies and caring for others; neighbors and friends, and especially Walter during his lengthy illness. Besides her love of family, Fofe loved the United States and never forgot their generosity to Greece after WWII. In 1976, Fofe earned her United States citizenship and was very proud of her sacrifice and study and becoming an informed voter. Fofe always said Alva meant so much to her because of all the wonderful people she was privileged to know. Fofe was baptized in the Greek Orthodox Church and always maintained her deep Christian faith through daily prayers. Over the years Fofe had developed a prayer list of those she knew and those who asked to be kept in her prayers. Until her recent illness, Fofe never missed a day of prayer and she will remain in ours until we meet again. Fofe will live on in our hearts and in every step her grandchildren and great grandchildren take. We will celebrate her sacrifices, love, and devotion to her children and grandchildren and forever we will be blessed. Fofe is survived by her children; daughter Audrey Piersall of Edmond, son Myron and daughter-in-law Maxine Cunningham of Norman, and son Don Cunningham of Oklahoma City, plus grandchildren Jared Cunningham and his wife April of Purcell, Ashley (Piersall) Sherwin and husband Mark Sherwin of Oklahoma City, and Kendall (Cunningham) Boffey and husband Andrew Boffey of Norman, and her great grandchildren Walker, Jaxson and Daxton Cunningham of Purcell, and Rowan Sherwin of Oklahoma City plus other nephews, nieces and brother Constantinos Kouvelopoulos of Athens, Greece. Fofe’s family would like to thank Dr. Phil Self as well as the staff at Share Hospital and Beadles Nursing Home for their compassionate and loving care. The Mass of Christian burial will be held at Sacred Heart Church in Alva, OK on Friday, March 6th at 11:00 am followed by interment at Alva Municipal Cemetery.

Fofe&#8217;s life ended peacefully on February 6, 2020, at the age of 91 years, when she went home to be with her Lord and Savior and reunited with Walter Cunningham, her spouse of 46 years, her parents, Nikolaos Kouvelopoulos and Irene Likari... View Obituary & Service Information

The family of Fotini "Fofe" Kouvelopoulou Cunningham created this Life Tributes page to make it easy to share your memories.