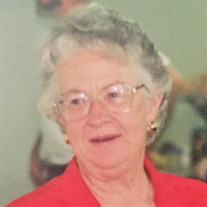 Funeral services for Frances Marie Hibbs will be 1:00 p.m. Tuesday, April 25, 2017, at the Waynoka First Baptist Church with Rev. David Shaw and Pastor Brian Holland officiating. Interment will be in the Liberty Cemetery under the direction of Marshall Funeral Home of Alva. Frances Marie Hibbs, daughter of the late Francis William and Beulah Marie (Gates) Butler, was born September 30, 1934, in Woodward County, Oklahoma, and passed away April 17, 2017, at Moore, Oklahoma, at the age of 82 years, 6 months, and 17 days. Frances attended rural school in Woodward County until her family moved to the Waynoka area while just before she enrolled in the third grade. She graduated from Waynoka High School with the Class of 1952. On October 28, 1954, she was united in marriage to John Gordon Hibbs at Oklahoma City. She lived in Moore where she worked in the office of the Moore Tag Agency for three years. She and John then bought American Printing and Binding, Inc. were she served as Secretary Treasurer for 11 years. They then leased several trucks to a trucking company and she kept the books on the trucks. They moved to the farm south of Waynoka in 1995. She was a member of the Waynoka First Baptist Church. She enjoyed being with her kids, grandkids and great grandkids. Besides her parents, she was preceded in death by one brother, Harley William Butler. Frances is survived by her husband, John, of Waynoka; four children, Sharon Kaye Buerger and husband, Mike, of Mustang, Cheryl Ann Lambert of Moore, Karen Marie Isbell and husband, Dee, of Oklahoma City, and John Gordon Hibbs, Jr. of Moore; five grandchildren, Richard Lee Newcomb and wife, Jada, of Newcastle, Michael Buerger of Oklahoma City, Harley William Isbell of Oklahoma City, Elizabeth Diana Dean and husband, Nick, of Choctaw, and Shannon Marie Findley and husband, Blaine, of Edmond; six great grandchildren; other relatives and friends. Memorial contributions may be made through the funeral home to Waynoka Masonic Lodge #422.

Funeral services for Frances Marie Hibbs will be 1:00 p.m. Tuesday, April 25, 2017, at the Waynoka First Baptist Church with Rev. David Shaw and Pastor Brian Holland officiating. Interment will be in the Liberty Cemetery under the direction... View Obituary & Service Information

The family of Frances Marie Hibbs created this Life Tributes page to make it easy to share your memories.

Funeral services for Frances Marie Hibbs will be 1:00 p.m. Tuesday,...

Send flowers to the Hibbs family.