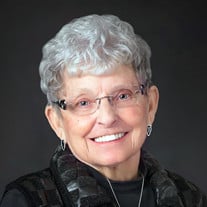 Memorial services for Genevra Jane Hartwig will be held Saturday, March 11, 2017 at 1:30 p.m., at the Zion Lutheran Church with Pastor Aaron Wagner officiating. A private family interment will be held prior to the memorial service at 11:00 a.m. at the Zion Lutheran Cemetery under the direction of Marshall Funeral Home of Alva. Genevra Jane, daughter of the late George Edward and Mildred Ella (Wheatley) Pfleider, was born May 18, 1937, on the family farm three miles east of Dacoma, Oklahoma. After a nine-year battle with breast cancer, she passed away March 5, 2017, at her home in Alva, Oklahoma, at the age of 79 years, 9 months, and 17 days. Jane attended Dacoma High School and received her Bachelors Degree and Masters Degree in Early Childhood Education from Northwestern State College. On August 25, 1957, she was united in marriage to Carl Warren Hartwig at the United Brethern Methodist Church in Dacoma. They moved to Kiowa, Kansas where she taught fourth grade for two years. Carl and Jane then moved to Alva where she taught kindergarten for sixteen years. After purchasing Woods County Abstract Corporation, she retired from teaching and began working in the abstract office with Carl. Carl and Jane wholeheartedly enjoyed working together on their farm, harvesting wheat, bailing alfalfa, and raising beef cattle. She especially loved working in her flowerbeds, canning, and bird watching. She was always trying to add a new bird species to her extensive list. Additionally, she enjoyed hunting, fishing, boating, bowling, and playing bridge. Jane was a member of the Zion Lutheran Church where she was active in Ruth Circle. She was also a member of PEO, Chapter C. Jane particularly cherished two-step dancing with her husband of nearly sixty years. The last twenty years, she held great sentiment in spending time with her five grandchildren and attending all of their respective activities. Aside from her parents, she was preceded in death by one brother, George Edward Pfleider, Jr. and an infant daughter. Jane is survived by her husband, Carl, of Alva; one son, Dr. Michael Dean Hartwig and wife, Marsha, of Perry; one daughter, Cathy Michelle Mapes and husband, Jeff, of Alva; five grandchildren, Michael Spencer Hartwig, Jansen Dean Hartwig, and Mitchell Ray Hartwig, all of Perry, and Courtney Michelle Mapes and Cathy Lee Mapes, both of Alva. Also surviving is her sister, Lavona Niles of Perry and two sisters-in-law, Mary McGowan and husband, Kenneth and Carol Wilson; a number of nieces, nephews, and other relatives and friends. Memorial contributions may be made through the funeral home to Northwestern Scholarship Foundation in honor of Jane Hartwig.

Memorial services for Genevra Jane Hartwig will be held Saturday, March 11, 2017 at 1:30 p.m., at the Zion Lutheran Church with Pastor Aaron Wagner officiating. A private family interment will be held prior to the memorial service at 11:00... View Obituary & Service Information

The family of Jane Hartwig created this Life Tributes page to make it easy to share your memories.

Memorial services for Genevra Jane Hartwig will be held Saturday,...

Send flowers to the Hartwig family.