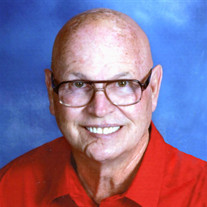 Memorial services for George Dale Courson will be 11:00 a.m. Monday, June 11, 2018, at the Driftwood Christian Church with Larry Cornforth officiating. He was cremated at his request under the direction of Marshall Funeral Home of Alva. George Dale Courson, son of the late George Robert and Rella Mae (Murrow) Courson, was born February 24, 1951, in Hardtner, Kansas, and passed away June 6, 2018, at Alva, Oklahoma, at the age of 67 years, 3 months, and 12 days. Dale graduated from Kiowa High School. On May 20, 1971, he was united in marriage to Luann Ruth Thompson in Driftwood, Oklahoma. They lived in Burlington until moving to Alva about 20 years ago. He retired from being a Maintenance Supervisor at Bill Johnson Correctional Center. He was a member of the Driftwood Christian Church where he served as an Elder. He enjoyed motorcycles, woodworking, and and OU football. His life and interests always centered around his family and his church. Besides his parents, he was preceded in death by one daughter, Megan Smith. Dale is survived by his wife of 47 years, Luann, of Alva; one son, Derrick Courson and wife, Angela, of Alva; one daughter, Mindi Cornforth and husband, David, of Elmore City, Oklahoma; one brother Dean Courson and wife, Judy, of Kiowa, Kansas; and two sisters, Sue Carlisle of San Angelo, Texas, and Betty Schmidt and husband, Doug, of Sharon, Kansas. Also surviving are 12 grandchildren, Joshua Johnson and wife, Alyssa, of Madison, Ohio, Haley Crow of Midwest City, Kaylea Smith of Alva, Anastasia Harper of Alva, Keaton Smith of Alva, Quentin Courson of Alva, Ethan Cornforth of Elmore City, Maci Cornforth of Elmore City, Drake Smith of Alva, Ashton Courson of Alva, Daxter Courson of Alva, and Leah Cornforth of Elmore City; one great-grand daughter, Brooklyn Hansel of Alva; other relatives and friends. Memorial contributions may be made through the funeral home to the Driftwood Christian Church Youth.

Memorial services for George Dale Courson will be 11:00 a.m. Monday, June 11, 2018, at the Driftwood Christian Church with Larry Cornforth officiating. He was cremated at his request under the direction of Marshall Funeral Home of Alva. George... View Obituary & Service Information

The family of George Dale Courson created this Life Tributes page to make it easy to share your memories.

Send flowers to the Courson family.