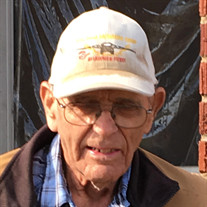 Memorial services for Glen Crusinbery will be 2:00 p.m. Friday, January 11, 2019, at the First Baptist Church in Waynoka with Rev. Don and Rev. Kathryn Boren officiating. Arrangements are under the direction of Marshall Funeral Home of Waynoka, LLC. Glen Cary Crusinbery, son of the late William Cary and Cora Rose (Corbin) Crusinbery, was born October 27, 1935, on the farm east of Waynoka and passed away January 8, 2019, at Alva at the age of 83 years, 2 months, and 12 days. He attended grade school at Twin Oakes and graduated from Waynoka High School. On July 31, 1955, Glen was united in marriage to Jacquelynn Urban at the United Methodist Church in Waynoka. They made their home on the farm for many years before moving to Waynoka in 1999. Glen was active in the 4-H and FFA Booster Club and the Chamber of Commerce. He was a founding member of the Woods County Mineral Owners and served on their board. He also served on the Waynoka School Board, the E.P. Clapper Hospital Board, the Waynoka Coop Board, and the East Woods District Soil Conservation Board. He was a farmer and rancher all his life. He enjoyed spending time with his grandchildren and great grandchildren. Besides his parents, he was preceded in death by his son, Glen Cary Crusinbery, Jr., and two sisters, Marjorie Hadley and Mildred Benson. Glen is survived by his wife, Jacque, of Waynoka; his daughters, Anne Haight and husband, Len, of Alva, and Susan Gum and husband, Gail Spencer of Aline; four sisters, Clara Boren of Booker, Texas, Gladys Snyder of Enid, Dorothy Ashton of Waynoka, and Oleta Rodgers of Denver, Colorado; eleven grandchildren, twenty seven great-grandchildren, and one great-great- grandchild; other relatives and friends. Memorial contributions may be made through the funeral home to the Waynoka Fireman’s Fund.

Memorial services for Glen Crusinbery will be 2:00 p.m. Friday, January 11, 2019, at the First Baptist Church in Waynoka with Rev. Don and Rev. Kathryn Boren officiating. Arrangements are under the direction of Marshall Funeral Home of Waynoka,... View Obituary & Service Information

The family of Glen Cary Crusinbery created this Life Tributes page to make it easy to share your memories.

Memorial services for Glen Crusinbery will be 2:00 p.m. Friday,...

Send flowers to the Crusinbery family.