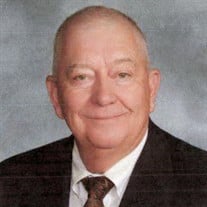 Funeral services for Glen William Elliott will be 10:00 a.m. Tuesday, March 6, 2018, at the Burlington School with Rev. Dale Carney officiating. Interment will be 3:45 p.m. Tuesday, at the Wellston Cemetery in Wellston, Oklahoma, under the direction of Marshall Funeral Home of Alva. Glen William Elliott, son of the late William Asa and Elsie Fern (Greenfield) Elliott, was born February 2, 1950, at Chandler, Oklahoma, and passed away March 1, 2018, at Oklahoma City, Oklahoma, at the age of 68 years and 29 days. Glen graduated from Wellston High School. He attended college at Wilberton for one year. On January 11, 1969, he was united in marriage to Judy Dianne Ennis. He then went to Stillwater and obtained his Degree in Agriculture Education from Oklahoma State University. He began teaching Ag Education in Waynoka, later in Freedom and Alva. While teaching he obtained his Masters in Education Administration and served as Superintendent of Davenport for five years before moving to Burlington, where he was Superintendent for 27 years. He enjoyed spending time with his grandson, and teaching and helping many students over the years. Glen’s passion was his cattle and working with Junior Maine-Anjou members. Besides his parents, he was preceded in death by his son, Scott Dustin “Dusty” Elliott. Glen is survived by his wife, Judy, of Burlington; one son, Matthew Glen Elliott of Burlington; one grandson, Jaxon Matthew Elliott; three sisters-in-law, Carol and Thomas Anderson, Sheral and George Danker, and Donna and Larry Evans; one brother-in-law, David Ennis; other relatives and friends. Memorial contributions may be made through the funeral home to the Burlington Education Foundation.

Funeral services for Glen William Elliott will be 10:00 a.m. Tuesday, March 6, 2018, at the Burlington School with Rev. Dale Carney officiating. Interment will be 3:45 p.m. Tuesday, at the Wellston Cemetery in Wellston, Oklahoma, under the... View Obituary & Service Information

The family of Glen William Elliott created this Life Tributes page to make it easy to share your memories.

Send flowers to the Elliott family.