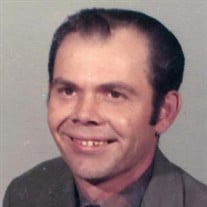 Glen Samuel Parker, Jr, charming son of the late Glen Samuel, Sr. and Ann Edith (Aldridge) Parker, was born in Hereford, Texas, on April 13, 1938, and passed away on September 1, 2019, at his wonderful and adoring home of Beadles Nursing Home in Alva, Oklahoma. Sammy may have only lived to be 81 years, 4 months, and 19 days, but anyone who knew Sammy would tell you that he was the best sweet talker, ornery, stubborn, charming, attractive, joking, fun, old man around. Sammy has gone to join his loving mother, Ann, beloved father, Glen, little sister, Glenda Ann, and grandson, Randall Jay, with our wonderful and loving Heavenly Father. He is survived by his six children, Starla Ann of Claremore, Oklahoma, Kendall of Texas, Glen Samuel, III, and his wife, Connie, of Springdale, Arkansas, Randy Allen and his wife, Tina, Lonnie Joseph and his wife, Chi, of Arkansas, and Crystal Ann of Waynoka, Oklahoma. Sammy is also survived by fifteen grandchildren, Vicki, Danette, Adam Glen, Sara May, Kenny, Alex, Lani Chi-Chen, Glen Samuel IV, Rebecca Nakoni, Triann, Travis, Anna, Dusti Dawn, Chelsea Rose, and Christina CarolAnn, great grandchildren, including Destiny Rene, Nicole Lynn, and Kaos Allen, nieces, nephews, and many other friends and family members. Glen Samuel attended Alva Schools. Sammy was a butcher and a mechanic by trade. He worked at his father’s Motor Clinic for many years. He attended the First Baptist Church of Alva with his parents and sister and attended the First Church of Nazarene of Alva in his later years. Sammy loved fishing, boating, playing the guitar, anything about a Ford vehicle, cruising the Boulevard in Alva, and singing, especially Johnny Cash. If Sammy was angry or getting irritated, everyone knew to just put on some Johnny Cash and Sammy would be in his happy place. Sammy was a wonderful man who will truly be missed and is loved more than he could have ever dreamed. Memorial services are being held on Friday, September 13, 2019, at 2:00pm at Beadles Nursing Home with Nathan Braudrick officiating. Inurnment will be held at a later date..

Glen Samuel Parker, Jr, charming son of the late Glen Samuel, Sr. and Ann Edith (Aldridge) Parker, was born in Hereford, Texas, on April 13, 1938, and passed away on September 1, 2019, at his wonderful and adoring home of Beadles Nursing Home... View Obituary & Service Information

The family of Glen Samuel Parker Jr created this Life Tributes page to make it easy to share your memories.

Send flowers to the Parker family.