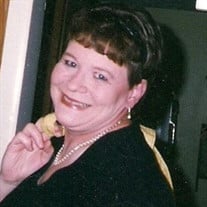 On Saturday, May 7, 2022, Grace Elaine Mathes went to be with the Lord at the age of 73 years, 3 months, and 9 days. Grace was born January 29, 1949 in Kearney, Nebraska, to Fred & Zola Mae (Chambers) Harvey. She grew up in Liberal and Kismet, Kansas graduating High School at Southwestern Heights in Kismet in 1968. Grace moved to Shawnee in 1982 to raise her daughter Mandy near family. She was a hard-working single mom, working at TDK for 20 years, all the while being active in the school system as a substitute teacher, the band boosters and in her church home Wallace Avenue Baptist Church in Shawnee. It was in Shawnee that she met John. They were married June 29, 2002, in Shawnee and later moved to John’s hometown of Alva. There they started the Honey Wheat Bed & Breakfast where she catered events and greeted guests with a heartfelt welcome into a cozy home and a hot homemade breakfast. She spent many summers cooking at the Falls Creek Camp. They later moved to their current home at Greensberg Corner where they welcomed their son Thomas Mathes. They opened the old Miller Café as the Honey Wheat Café & Catering in 2011 in Waynoka where Grace continued to welcome everyone with a smile and a homecooked meal. She was a great wife, mother, daughter, grandmother, and aunt who loved deeply and will be greatly missed by everyone whose life she touched with her warm heart. She was preceded in death by both parents, Fred and Zola; two brothers, Chet Harvey and Donald Harvey; and three sisters, Linda Lou Harvey, Calamity Jane Harvey, and Judy Harvey Turnell Warta Winslow. She is survived by her husband, John Mathes of Carmen; son, Thomas Mathes of Carmen, daughter, Mandy Clayton and husband, Oran, of Waynoka; granddaughter, Abbigail Clayton of Waynoka; mother-in-law, Beulah Mathes of Alva; sister, Katherine Edie and husband, Tom, of Bethel; numerous nieces, nephews, and other family and friends. Funeral Services will be 2:00 p.m. Saturday, May 14, 2022 at the Alva Church of God with Pastor Nathan Braudrick officiating. Interment will be in the Galena Cemetery under the direction of Marshall Funeral Home of Alva. Memorial contributions may be made through the funeral home to the Alva Church of God or the Alva Senior Citizens.

Send flowers to the Mathes family.