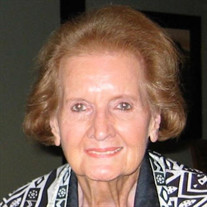 Graveside services for Gwendolyn Kelsey Gregory will be 11:00 a.m. Saturday, April 7, 2018, at the Memorial Hill Cemetery under the direction of Marshall Funeral Home of Waynoka. Gwendolyn Kelsey Gregory, born 1925, at Waynoka, Oklahoma, died at her home peacefully in Dallas, Texas. Gwen was a graduate of Oklahoma University where she received a BA in Interior Design. In her early years, she worked at the capital building in D.C. There she met Roy, married and moved to Chicago. They spent the rest of their life in Dallas. Besides her parents, John and Marie Kelsey, she was preceded in death by her husband, Roy Gregory of 46 years. Gwen is survived by her son Marshall Gregory and his wife, Deborah, grandson Nathan, and granddaughter Natalie, of Grapevine, TX; her daughters, Leslie Michel and her husband, Rick, of Las Vegas, NV, and Jill Hayes and her husband Drew, of Long Beach, CA.; and niece Terri Lozano, Alpine, CA. The family would like to thank her caregivers, her sweet friends, and the angels who came into her life during her last years. A Memorial Service was held at Saint Michael and All Angels Episcopal Church, Dallas, TX.

The family of Gwendolyn May Gregory created this Life Tributes page to make it easy to share your memories.

Graveside services for Gwendolyn Kelsey Gregory will be 11:00...

Send flowers to the Gregory family.