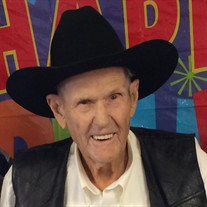 Graveside services for Harold Dwaine Danielson will be 2:00 p.m. Saturday, May 26, 2018, at the Alva Municipal Cemetery with Steve Danielson officiating. Interment is under the direction of Marshall Funeral Home of Alva. Harold Dwaine Danielson, son of the late Earl Elias and Hattie Lee (Rogers) Danielson, was born December 1, 1924, in Bado, Major County, Oklahoma, and passed away May 23, 2018, at Capron, Oklahoma, at the age of 93 years, 5 months, and 22 days. Harold attended the Sternberg Country School. On November 23, 1944, he was united in marriage to Wilda Alice Wilson. He worked for several companies in the pipeline and oil and gas industry as a diesel mechanic. On April 3, 1973, he was united in marriage to Betty Jean Lewis in Colorado. He retired in 1989. After Betty passed away in 1997, he enjoyed the company of Margaret Merrill until she passed away in 2012. He was a member of the College Hill Church of Christ and the International Union of Operating Engineers. He enjoyed hunting, fishing, farming and collecting. Besides his parents, he was preceded in death by his wife, Wilda, in 1972; his wife, Betty Jean, in 1997; one son, David Danielson; two brothers, Delmar Danielson and Neal Danielson; and three sisters, Phyliss Hickey, Alice Danielson, and Naomi Slape. Harold is survived by four children, Steve Danielson and wife, Marcy, of Wagoner, Oklahoma, Sharon Rawlins of Garden City, Kansas, Tom Danielson and wife, Brenda, of Burlington, and Linda Ferguson and husband, Roger, of Tulsa; two sisters, Earleen Cornell of Pueblo, Colorado, and Delphine Matthews of Muskogee; one brother, Bill Danielson of Missouri; 11 grandchildren; 21 great grandchildren; 2 great-great grandchildren; other relatives and friends. Memorial contributions may be made through the funeral home to the Capron Volunteer Fire Department.

The family of Harold Dwaine Danielson created this Life Tributes page to make it easy to share your memories.

Graveside services for Harold Dwaine Danielson will be 2:00 p.m....

Send flowers to the Danielson family.