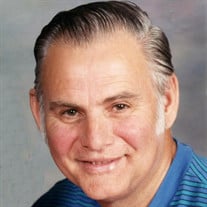 Memorial services for Harold Allen Hada will be 2:00 p.m. Saturday, October 17, 2020, at the Marshall Funeral Home Chapel with Rev. Gail Edmison officiating. Harold was cremated at his request under the direction of Marshall Funeral Home of Alva. Harold Allen Hada, son of the late Bert and Jessie Mae (Lewis) Hada, was born July 22, 1941, in Alva, Oklahoma, and passed away September 24, 2020, in Enid, Oklahoma, at the age of 79 years, 2 months, and 2 days. Harold attended Alva School. He proudly served his country in the United States Army from 1966 to 1968 including one tour in Vietnam. He was united in marriage to Vergie Wilks on November 30, 1959. To this union one daughter, Sherri Lynn, was born on March 6, 1962. He lived in Alva until moving to Kiowa, Ks in 1962 then to Cherokee in 1964 and then moved back to Alva in 1980. He worked at several jobs before becoming a custodian in the Alva school system in 1980. On July 7, 1984, he was united in marriage to Connie Graves in Alva and with this union he acquired two daughters, Tanya, and Jennifer. His health forced him to retire from the Alva Schools in 2013. He was a member of the Town and Country Christian Church. He was an avid supporter of the Alva Ladybugs and the Goldbugs. He also enjoyed fishing and loved spending time with his grandchildren. Besides his parents, he was preceded in death by his wife, Vergie; his wife, Connie; one daughter, Sherri Lynn Hada; three brothers, Gilbert, David, and Alfred Hada; and three sisters, Jessie Hart, Sue Eckels, and Lillie Ann Hada. Harold is survived by two daughters, Tanya Franklin and husband, Glenn, of Enid and Jennifer Hess and husband, Scott, of Alva; 5 grandchildren, Xavier, Xon, and Xcell Franklin, all of Enid, and Rhett and Riley Hess, both of Alva; other relatives and friends. Memorial contributions may be made through the funeral home to the Alva Goldbug Foundation (checks must be made payable to CFO).

The family of Harold Allen Hada created this Life Tributes page to make it easy to share your memories.

Memorial services for Harold Allen Hada will be 2:00 p.m. Saturday,...

Send flowers to the Hada family.