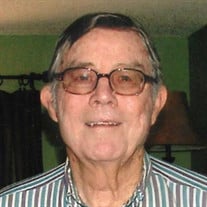 Funeral services for Harold Janzen will be 10:30 a.m. Tuesday, September 27, 2016, at the Alva First Baptist Church, with Dr. Greg Hook officiating. There will be a visitation at the funeral home on Monday from 5:00 to 7:00 p.m. with the family present. Interment will be in the Alva Municipal Cemetery under the direction of Marshall Funeral Home of Alva. Harold B. Janzen, son of the late Barney and Agnes (Wiebe) Janzen, was born on April 11, 1925, on a farm near Hooker, Oklahoma, and passed away on September 23, 2016, at Enid, Oklahoma, at the age of 91 years, 5 months, and 12 days. Harold grew up in the Adams community except for two years during the dust storm years of 1938 - 1940. They went to California and worked as migrant workers picking cotton, grapes, and other fruit. After two years the family moved back to Oklahoma. Harold graduated from Adams High School and spent his first year of college at Panhandle A & M. He graduated from Tabor College in Hillsboro, Kansas, with a Bachelors Degree. He was drafted into the United States Army serving in Germany with the occupational forces and was honorably discharged as a Sargent on May 15, 1956. On April 21, 1953, he was united in marriage to Helen Wiens at Meade, Kansas, and that fall they moved to Stillwater, Oklahoma, where he earned a Bachelor of Science and a Masters Degree in Mechanical Engineering from Oklahoma A & M. Harold worked for Conoco for seven years before attending Dallas Theological Seminary in Dallas, Texas, where he received his Master of Theology. He pastored a Mennonite Brethren Church for 7 years in Okeene, Oklahoma, and 3 years in Topeka, Kansas. Later he went to work for Sun Oil Company as a Petroleum Engineer until his retirement and they moved to Alva in 1990. Harold was a faithful member of Alva First Baptist Church, serving as a Deacon and Sunday School Teacher. He was also an active member of the Kiwanis Club for many years. Besides his parents, he was preceded in death by one brother, Walter Janzen; and one sister, Verna Wiens. Harold is survived by his wife, Helen, of Alva; two daughters, Virginia Bierig of Alva, and Mary Rhodes of Alva; one brother Chet Janzen and wife, Marlece, of Topeka, Kansas; 6 grandchildren, Megan Ream and husband, Clint, Aaron Bierig and wife, Leah, Hayden Bierig and wife, Nicole, Lacey Rhodes and Thomas Scott, Stetson Rhodes, and Bailey Rhodes; 9 great grandchildren, other relatives and friends. Memorial contributions may be made through the funeral home to the Wycliffe Bible Translators, the Dallas Theological Seminary, or the charity of your choice.

Funeral services for Harold Janzen will be 10:30 a.m. Tuesday, September 27, 2016, at the Alva First Baptist Church, with Dr. Greg Hook officiating. There will be a visitation at the funeral home on Monday from 5:00 to 7:00 p.m. with the family... View Obituary & Service Information

The family of Harold B. Janzen created this Life Tributes page to make it easy to share your memories.

Send flowers to the Janzen family.