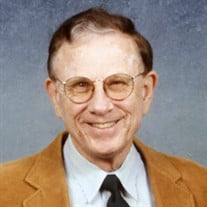 Funeral services for Hartsell Alton Johnson will be 11:00 a.m. Friday, October 2, 2020, at the Marshall Funeral Home Chapel with Lanny Jobe officiating. Interment will be in the Alva Municipal Cemetery under the direction of Marshall Funeral Home of Alva. Hartsell Alton Johnson, son of the late Ruben Ira and Ethel Mae (Boggs) Johnson, was born June 28, 1928, in Haskell, Texas, and passed away September 29, 2020, in Alva, Oklahoma, at the age of 92 years, 3 months, and 1 day. After Hartsell graduated from Haskell High School, he attended Abilene Christian University where he obtained his Bachelor’s Degree. While attending Abilene Christian, he met and married Lois Helen Hood from Kiowa, Kansas, on August 31, 1948. They lived most of their 72 years in Oklahoma, except for four years in Hutchinson, Kansas. He received his Master’s Degree from Central State University. He served as a full time pulpit minister in Kansas and Oklahoma for 18 years. He then taught school in Woodward for 4 years. He was called to Alva and became the first preacher at the new College Hill Church of Christ building, later serving as elder. He also filled in preaching in various area congregations, and teaching Bible classes at NWOSU. He served as the Bible Chair Director for 28 years. He made numerous trips to Israel and was able to share Bible information with others. All of his working time was related to various services of the Church of Christ. Hartsell is survived by his wife, Lois, of Alva; one son, Kyle Johnson of Ft. Worth, Texas; one daughter, Christy Crawford and husband, Dennis, of Moore; one brother, Loraine Johnson of Haskell, Texas; one sister, Jo Iva Long and husband, Gene, of Haskell, Texas; 4 grandchildren; 9 great grandchildren; other relatives and a multitude of friends. Memorial contributions may be made through the funeral home to the Bible Chair or to the Alva EMTs.

Funeral services for Hartsell Alton Johnson will be 11:00 a.m. Friday, October 2, 2020, at the Marshall Funeral Home Chapel with Lanny Jobe officiating. Interment will be in the Alva Municipal Cemetery under the direction of Marshall Funeral... View Obituary & Service Information

The family of Hartsell Alton Johnson created this Life Tributes page to make it easy to share your memories.

Funeral services for Hartsell Alton Johnson will be 11:00 a.m....

Send flowers to the Johnson family.